Book Review: Blood on the Forge (1941) by William Attaway 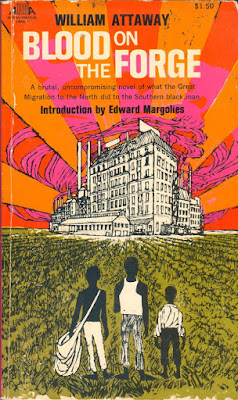 The Great Migration is the term used to describe the movement of black Americans away from the Deep South starting during the First World War and continuing into the 1950s and '60s. The estimated six million blacks who fled the South were leaving behind abject poverty, violent racism and Jim Crow laws. This novel follows three brothers from Kentucky who go north in 1919 to work in the steel mills of Pennsylvania. The Moss brothers, Big Mat, Melody and Chinatown, flee their farm (they're sharecroppers) after Mat is cheated out of receiving a new mule by a white overseer. Mat, who is a walking pillar of anger at the best of times, strikes down the overseer and kills him.

The brothers immediately get work in the mills and find themselves living in a radically different world. Their fellow workers are almost entirely migrants, although from Ireland and eastern Europe, and they're free, mostly, of the racism that was part of the air the brothers breathed in Kentucky. There's even a black supervisor in charge of white workers at the mill. Although the brothers are making more money than they've ever dreamed of, they haven't landed in paradise. The work is difficult and dangerous, and they soon realize that black workers are viewed with suspicion because they're often brought in as strikebreakers. Sure enough, a strike action does take place and the brothers find themselves caught in the middle.

William Attaway, who was black, only wrote two novels, and this one, his last, should be better known. It was probably inspired by The Grapes of Wrath, the story of America's great white migration, but unlike Steinbeck, Attaway takes a harsher look at his main characters. The Moss brothers are not overly sympathetic. Chinatown in feckless and lazy, Mat is a violent brute, and Melody is weak and indecisive. It's clear, however, that their personalities have been forged in the racism and economic structures of the South in the same way that raw material is forged into steel in the North. The brothers are ill-equipped for the relative freedoms of the North. They drag their psychological peonage with them, and when Mat gets a chance to be become a police deputy and strikebreaker, he leaps at the opportunity to be an empowered black man exerting authority over whites. It doesn't turn out well for him.

The novel also has a very clear-eyed view of class politics. The tragedy of the novel is that the workers at the steel mill can't see that the mill owners are using race as a wedge to divide them. Whites see the blacks as scabs, and the blacks are seduced into this role by the lure of unheard of wages (compared to sharecropping) and by their ingrained habit of obeying white authority. None of the workers, white or black, can see the commonality of their struggle.

Attaway has a real flair in describing working-class life. The mill is a place of danger, yet awe-inspiring in its violence and ferocity. The ramshackle town that surrounds the mills is vividly described, with no attempt to avoid showing the brutal nature of some of its inhabitants. Attaway was clearly sympathetic to the suffering of the downtrodden, but never shows any inclination to sanitize their lives; in fact, this is probably why the novel did not do well on its release. It would have been too raw for most of the white, middle-class reading public, and even supporters of the working classes might have been daunted by its portrayal of people on the bottom of the economic ladder. The Grapes of Wrath was a much more palatable option in the field of proletarian literature.
Posted by Cary Watson at 4:07 PM 1 comment: