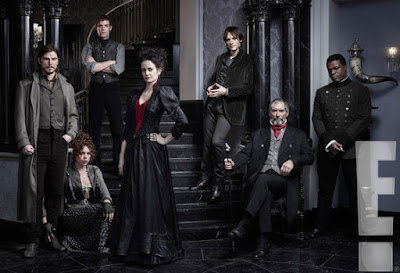 When I was growing up in the 1960s, horror films came in two varieties; there were American creature features like Them or The Thing, and then there was Hammer Films. Hammer had the smart idea to take classic horror icons such as Dracula, Frankenstein and the Wolfman and give them a bit of a polish--Technicolor, more realistic violence, and, most importantly, much better acting than was the norm in horror films. The style, professionalism and gravitas of Christopher Lee and Peter Cushing is what gave Hammer its unique appeal.

In truth, Hammer's output was very spotty. For every Horror of Dracula there was a piece of dreck like Twins of Evil. And even Hammer's best efforts can today be looked at as respectable, slightly earnest Masterpiece Theater-style attempts at horror. Nostalgia has made Hammer into something better than it actually was. The brilliance and appeal of Showtime's Penny Dreadful is that it gives us Hammeresque horror that actually matches up to our fond and fuzzy memories of Lee, Cushing & Co.

The central characters, or what turns out to be a sort of Marvel Avengers team of supernatural superheroes, are Dorian Gray, Viktor Frankenstein, Frankenstein's monster (called John Clare), the Werewolf, an Allan Quatermain clone, and Vanessa Ives, who is some variety of witch. Season one had the crew battling a vampire who has taken possession of Vanessa's childhood friend, Mina Harker. Yes, that Mina Harker. Season two has our late-Victorian heroes up against a coven of witches who want to offer up Vanessa to Satan for breeding purposes.

As is usual with limited run series on specialty channels, the plot is spread out very thinly over a few too many episodes. I can easily forgive that sin in this case. Penny Dreadful is a luxurious exercise in the visual and literary tropes of Victorian horror, with a dash of steampunk thrown in. The production design is sometimes breathtaking, the costumes magnificent, and the bloodletting is abundant. Even better is the acting. Eva Green as Vanessa is asked to chew up copious amounts of scenery and she does so with absolute gusto. It's a wonder she didn't permanently damage some facial muscles with all the weeping, screaming, howling and raging she's required to do. The other standout in the cast is Rory Kinnear as John Clare, Frankenstein's monster and easily the most complex character in the show. He's subject to murderous rages, but at heart he has the soul of a poet. Kinnear brings intense humanity to the role and banishes any comparisons with other actors who've played this character. Honourable mention goes to Simon Russell Beale as Ferdinand Lyle, in a performance that's so camp he must have channeled the spirit of Kenneth Williams. The only slightly disappointing thespian is Reeve Carney as Dorian Gray. Dorian is supposed to be a decadent, world-weary aesthete, but Carney makes him into more of a decadent, world-weary barista.

Penny Dreadful also earns marks for being dead serious about its basically absurd concept. John Logan, the screenwriter/producer, never gives the audience any knowing winks, and I think there's only one scripted joke in the entirety of the two series. This seriousness helps pulls the audience into the story because we never get the feeling that we're watching an homage or pastiche. Logan also gives his series an overall philosophical theme: the destructive and redemptive power of love. There's something you won't find in Hammer films. All of Penny Dreadful's main characters wrestle with the problem of love in all its forms: forbidden, unrequited, impossible, tragic, sexual, and platonic. In fact, Penny Dreadful could be described thusly: when loves goes wrong, the supernatural shit hits the fan.
Posted by Cary Watson at 12:11 PM No comments: