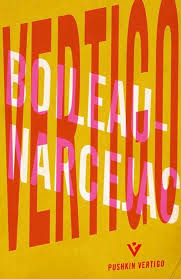 Yes, this is the novel that Hitchcock's Vertigo was based on, although the original French title was D'entre les Morts. It's been republished with same title as the film, and the good news is that in some ways it's even better than the film. The major difference between the novel and the film is that the novel is set in France, but other than that the film follows the book relatively faithfully. For those of you who've been living in a cave, the story is about a retired police detective (Flavieres) who quit the force after a traumatic incident on a rooftop. Some years later, an old friend he hasn't seen in years looks him up and asks to follow his wife, Madeleine. She is, according to the husband, acting strangely and might be suicidal. Flavieres follows her and saves her from a suicide attempt. Flavieres falls in love with Madeleine, but a few weeks later she throws herself from a church tower, a fatal event witnessed by Flavieres. Four years pass and Flavieres sees a woman he swears is Madeleine. He follows her, woos her, and tries to get her to admit that she is Madeleine. She finally reveals that she played the role of Madeleine as part of a murder plot. Flavieres strangles her and is hauled off to jail. Roll credits.

Hitchcock sensibly made his ending more visual and more dramatic, but what gives the novel extra interest is its Second World War setting. The first part of the novel takes place during the so-called "Phony War" period of 1940, when the French (and British) populations were confident that the war was going to end with a whimper, if it ever managed to get going. The final section of the story is set in late 1944, with France mostly liberated but still demoralized and licking its wounds. Madeleine's deception is meant to find its echo in the Phony War, and the revelation of her role in the plot is, I think, a symbolic reference to those French who collaborated with the Nazis.

Boileau and Narcejac (they were a writing team) had a reason for setting their story during the war, and this added political component gives the novel more depth, more resonance than the film version. Usually writing teams are a recipe for bland prose, but this duo's writing is lively and clever, even stylish. If Vertigo the film is about obsessive love, Vertigo the novel more about betrayal of both the romantic and political variety.

I don't believe it either: I've written a mystery novel! Just click on the above image and you'll be whisked away to a lovely place where you can order my book for yourself and your numerous friends and relations. It's an impulse purchase you won't regret. You can also order it at Amazon.com. If you do book reviews on your own website contact me to see about getting a review copy.
Follow @JettisonCocoon