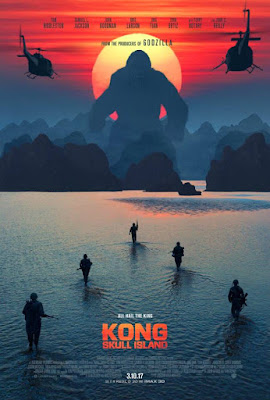 This is a poorly-made movie and that immediately makes it the best of the Kong/Godzilla reboots that have bellowed and crashed their way into multiplexes over the last decade and a bit. I include Godzilla in the mix because whether the star monster is covered in scales or fur, the films they're in all follow the same playbook. Where previous iterations have gone wrong is in trying to be conventionally good films--you know, the kind with properly developed characters, plausible dialogue, and believable human relationships. That's not what monster movies (or "kaiju" films if you want to get excessively nerdy) are supposed to be about. The appeal of these films is in watching outsized critters kick ass. That's it. No one wants anything more. The original Toho films stuck to this formula and surrounded the smackdown sequences with preposterous dialogue, barely-there plots, and stock characters. Kong: Skull Island is a return to those roots.

The smashing, the roaring, and the screaming of terrified humans starts early and rarely lets up. The effects are fine, and kids, the real and traditional audience for this kind of film, should have a joyous time at the theatre. The rest of us can marvel at how little in the way of directorial competence and script writing ability one gets for a budget of $200m. There are far too many supporting actors (none of whom are introduced properly), all the dialogue is flat, and most of the actors seem unsure of what tone to adopt. Samuel L. Jackson takes his part very, very seriously, John C. Reilly is looking around for Will Ferrell to riff with, Brie Larson seems distracted, and Tom Hiddleston gives us the poshest ex-SAS mercenary ever--instead of a gun I was expecting him to be armed with a Fortnum & Mason's picnic hamper.

As shambolic as most of the film is, it at least delivers lots of visual thrills in a reasonable running time, something that none of the recent monster megafauna movies have managed to do. Peter Jackson's King Kong was farcical, Pacific Rim was tedious and visually muddy, and, the worst of all, Godzilla (2014) was perversely determined to not show off its titular hero. So let's hope the Kong: Skull Island sequels are all as enthusiastically dumb.
Posted by Cary Watson at 2:35 PM

CGI keeps inflating the scale of the monsters, to the point that they lack any compelling connection with the humans or even the landscape... You can't peel off Faye Wray's clothing with fingers the size of the Hindenburg!

Brilliant review by the way..

Sam told me they upsized Kong so that he matches Godzilla, size-wise, in the eventual Kong vs Godzilla film. I was surprised Kong didn't peel off Tom Hiddleston's clothing--he was prettier than Brie Larson.

I read your article.Its interesting but let me tell you one thing about me that i don't like politics.But there were some points in your article which were quite note-worthy.