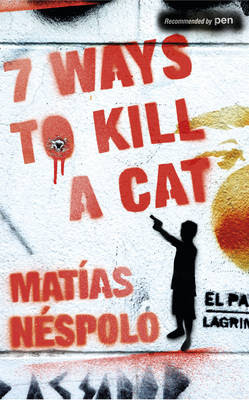 Here's a crime fiction novel that redefines "noir." A lot of contemporary crime fiction is described as noir, and as dark as these stories often are, they almost always take place in milieus that their middle-class readership is familiar with: North American and European cities in which the characters, no matter how gritty or "street", have cars and homes, and generally have a consumer lifestyle most people would recognize. This is far from the case in Matias Nespolo's novel. It's set in the barrios of Buenos Aires and its protagonist and his peers live in tin shacks and own nothing but the clothes they wear.

Gringo, the main character, and his pal Chueco are in their late teens(?), have no real family, and make their living from petty crime. They spend most of their time either taking drugs or trying to find drugs. The two decide to rob a local bar owner at closing time, and, not surprisingly, things go pear-shaped and the pair come to the attention of El Jetita, the local crimelord. From that point on things spiral downhill for all the characters as a rival gangster from a neighboring barrio moves against El Jetita. Outside the barrrio the city is being gripped by protests and strikes by teachers, labourers and others.

One of the smartest parts of this novel is that it doesn't come to a conclusion: one crisis simply bleeds into another. Gringo slips away from the gang warfare in the barrio to run headlong into political violence in the larger city. The last we see of him he's preparing to throw rocks at riot police. The author does a great job of showing that life in the barrio is simply a constant scramble to find refuge and comfort between various crises and disasters. Gringo finds an unusual source of comfort in a copy of Moby Dick that he picks up on a whim. He reads Melville's novel at odd moments, and seems drawn to Ishmael's restlessness, the madness of Ahab, and the idea of the ship's men, like people in the barrio, being battered by forces beyond their control.

Nespolo has a political message in his novel, one that might not be readily apparent to non-Argentinians like me, but there's nothing didactic or preachy going on here. Nespolo is sympathetic to the savage life of the barrio, but he certainly doesn't sugarcoat the motives or actions of his characters, most of whom are as vicious as feral cats. The message seems to be that the barrio creates these people, not the other way around. As grim as much of the novel is, this is an exhilarating, even fun, story. The dialogue and action is crisp, nasty and the story's twists and turns are never predictable.