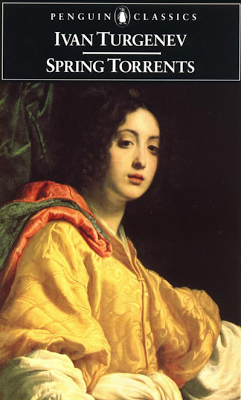 The first thing you notice about a Turgenev novel is that it's a lot leaner than those of his Russian contemporaries. Turgenev didn't write sprawling Tolstoyan epics; his specialty was short stories and perfectly formed novels that have a very modern feel, especially in their treatment of women. Most 19th century novels, even those by women, tend to describe female characters in the simplest terms: good women are pure and saintly, bad girls are wicked and slatternly right to the bone. Turgenev, who had problematical (to say the least) relationships with all the women in his life, created female characters that are strikingly real. Spring Torrents highlights Turgenev's skill in this area, as well as his ability to describe the pains and pleasures of love.

The plot is deceptively simple. It begins in  St. Petersburg where Dmitry Sanin, a wealthy, bachelor landowner is looking gloomily at his empty life. Cue the flashback. Sanin recalls a trip he made to Frankfurt thirty years ago when he was twenty-two and taking a tour of Europe. Sanin wanders into a pastry shop run by an Italian family and almost immediately falls in love with Gemma, the 19-year-old daughter of the shop's owner, a widow named Lenore. Gemma is, however, engaged to a pompous German shopkeeper. In short order Sanin fights a duel to defend Gemma's honour, and she breaks off her engagement in favour of Sanin. Everything's looking good until Sanin meets an acquaintance from school now married to Maria, a brauty who says she's willing to purchase Sanin's estate so that he'll immediately have the money to marry Gemma and begin his new life in Germany. It turns out that Maria is mostly interested in seducing Sanin, which she accomplishes in fairly short order. Sanin is left consumed with shame and writes a letter to Gemma to tell her that he's not worthy of her love. He returns to Russia to live with his regret, but in the final pages of the novel he tracks down Gemma, who is now living in New York with her husband and family. The last we see of Sanin he's heading to New York.

Gemma and Maria are the twin stars of the novel. Most 19th century novelists (Dickens being the most obvious example) would have made Gemma a vapid paragon of virtue. Turgenev makes her funny, a touch eccentric, and not given to attacks of the vapours or any other kinds of behavior common to literary heroines of the time. The love affair Gemma becomes involved is implausible, but she is very real. Maria is even more the star of the show. She's trouble and it's spelled f-e-m-m-e f-a-t-a-l-e. What's unique about her character is that Turgenev makes her so damn charming. She seduces Sanin just to win a bet with her husband (it's very clear he's gay), and it's something she's done before. As bad as this behavior is, it's almost impossible not  to still like Maria, she's that charming.

Turgenev is also at the top of his game in his analysis of the psychology of love, a subject that he was a master of. Here he is describing first love:

First love is exactly like a revolution: the regular and established order of life is in an instant smashed to fragments; youth stands at the barricade, its bright banner raised high in the air, and sends its ecstatic greetings to the future whatever it may hold -- death or a new life, no matter.

It's that kind of writing that knocks the edges off this novel's melodramatic plot and makes it feel, in parts, very modern. Turgenev's sense of humour also helps in that regard. He can't resist mocking all things German, including having Gemma's pompous fiance read from a German book called Merry Quips or You Must and Will Laugh. That book actually existed, and Turgenev was clearly in on the joke that Germans have a difficult relationship with humour. The more things change...

If your view of Russian literature has been formed by dour literary giants like Dostoevsky and Tolstoy, give Turgenev a try. He's no less a genius than the other two, but his prose style is a lot more agreeable to 21st century readers.
Posted by Cary Watson at 6:38 PM