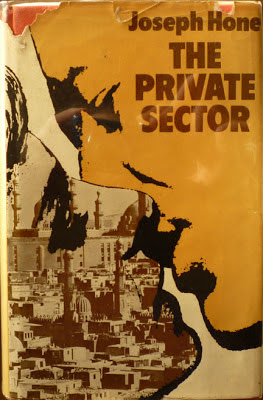 It sometimes seems those parts of the Internet not taken up with porn or cat videos consist of people breathlessly telling the world about the best film/TV show/beach/bagel "you've never heard of." Well now it's my turn, and my nominee in the category of spy fiction writer is Joseph Hone. How unknown is he? Amazon shows only a few of his books for sale, and even the Toronto Public Library (where I work) has only two titles, and we're a library system that's sclerotic with dusty old genre fiction. And how good is Hone? So good I'm calling an audible and kicking him out of the spy fiction field; there's no need to ghettoize him in a genre, he's simply one of he best writers I've come across, genre or otherwise, in a good long while.

The Private Sector is set in Egypt in 1957 and '67. The 1957 section revolves around the recruitment of Peter Marlow, a dual citizen of Ireland and Britain working in Cairo as a teacher, into the British Intelligence Service. The '67 section follows Marlow as he returns to Cairo to investigate whether a fellow agent is defecting. I'm not going to attempt a plot synopsis because to properly describe the twists and turns would require flow charts, venn diagrams, and possibly a PowerPoint presentation. Just take my word for it that the plot is everything you want in espionage fiction; full of double agents, double-crosses, and double whiskies served in hotel bars to shifty-eyed men trying hard not to look like they're there to spy on the shifty-eyed men down at the other end of the bar.

What's most remarkable about this novel is the beauty and intelligence of Hone's prose. His descriptions of Egypt and Cairo, his ruthless and incisive portraits of even the most minor characters, and his masterful handling of his theme of a British Empire in its final decline, it all takes your breath away. Here's a couple of examples, among many, of Hone's sharp writing:

"...or perhaps it was the rather sinister attraction Arab countries can have for people with  an authoritarian view who have somehow not managed  to express that aspect of their personality adequately at home. Egypt had reconciled Cherry to the mild tyranny of his nature."

"Giant pitch-black Nubian waiters in blues and golds, like coloured pictures from a child's Bible, padded aloofly round their table, pouring out whiskies and dumping ice from great silver bowls, strangers to this tribal feast."

Another reason I don't want to stick Hone in the spy fiction ghetto is that the first third of this novel is pure literary fiction. This section of the novel describes Marlow's early days in Egypt and the beginnings of his relationship with Bridget, whom he eventually marries. This part of the book can be read as a brilliant novella about the human flotsam and jetsam left behind by the rapidly receding British Empire. The Egypt Marlow sees in '57 is a curious, pathetic, and droll world of Brit expats gone to seed and middle-class Egyptians anxiously aping the rituals and tastes of their former masters, wittily symbolized by a boy at Marlow's school who always sets his watch to GMT, two hours behind Egypt. It's in this part of the novel that you realize that Hone shouldn't be compared to people like Ambler or Le Carre, but to writers like Patrick Hamilton and Olivia Manning, two authors who took a ferociously forensic approach to their characters and the social environment they moved in. I was particularly reminded of Manning, whose sextet of novels about an English couple in World War Two (The Balkan Trilogy and The Levant Trilogy) shares with Hone's book the theme of the British Empire slowly leaving the playing field of history. Both writers do a superb job of describing the melancholy and bitterness of people caught up in this transition.

When it comes to the espionage aspects, Hone is bracingly cynical. None of the spies on view are idealistic or committed, and their masters are seemingly equally free of ideology. Marlow quickly learns that empire building (or breaking) is a kind of game in which the score is kept but there are never any winners. This games aspect of spying is cleverly underlined by several sequences involving badminton, croquet and tennis, and several mentions of different kinds of playing fields. Marlow is essentially tricked into becoming a spy, and Hone shows us that the other spies playing the game do so because it satisfies a psychological itch or indulges a fantasy.

Hone is still alive and writing, and a couple of years ago he wrote an autobiography called Wicked Little Joe that's supposed to be pretty damn good. Finally, credit where credit is due: I was tipped off to Hone by a piece on author Jeremy Duns' blog. The link to his article is here.
Posted by Cary Watson at 2:40 PM

Peter,
Definitely. You might also want to try Michael Pearce. His mysteries are set in Edwardian Egypt. Here's my review.

I wrote about one of the Michael Pearce novels a while back. But this Joseph Hone us highly interesting. I had not heard of him before.

Yes, Hone's becoming something of a cult writer. The tricky part is finding copies of his books. I hope Philly is well supplied with second hand bookstores. Pearce is a real delight; I think a lot people might mistake him for a cosy writer, but he's far more sophisticated than that.