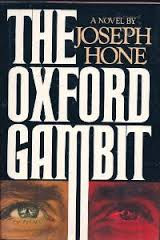 After reading and reviewing Joseph Hone's first spy novel, The Private Sector, I resisted the urge to dive into another of his books. He's only written a handful of novels and I didn't want to use up the limited supply in a matter of weeks. I failed. I simply couldn't help myself; his writing is so good, in so many ways, I just had to try another to see if he was more than a one-novel wonder. No worries; The Oxford Gambit is also in the stratosphere of espionage fiction.

This time out, Peter Marlow, the hero (if that's the right word) of The Private Sector is brought out of retirement to investigate the mysterious disappearance of Lindsay Phillips, one of MI6's top-ranking officers. It's not clear if Phillips was abducted or defected, and there are some within MI6 who don't want Phillips found at all. Marlow is a friend of the Phillips family, and for a time was romantically involved with Lindsays' daughter. Marlow's investigation takes him across Europe, and each stop on the journey reveals as much about Lindsay and his family as it does the reason for his disappearance.

As with Sector, Hone uses the spy genre as a framework for a more ambitious goal; in this case, a meditation on the impossibility of knowing everything, or anything deeply meaningful, about an individual's character and beliefs. In Hone's view, no matter whether a relationship is based in politics, faith or love, nothing a person says or does in front of a loved one or an ally or even an enemy is ever fully representative of what that person truly feels or believes. A relationship, like espionage, is a game of bluffs, ruses and, sometimes, cruel betrayals. Hone doesn't forget to incorporate the traditional elements of spy fiction--danger, violence, intrigue--but his emphasis is very clearly on how human relationships can mirror the twists and turns and horrors of the cloak and dagger world.

Another brilliant aspect of the novel is it's look at how the political and moral choices made by people before and during the Second World War have cast long and deadly shadows. The story is set in the mid-1970s, but for the main characters events of forty years ago are still dictating their actions, and, for some, secrets kept too long can be as deadly as bullets. Hone's twin themes of the mystery at the heart of the individual and the terrible and difficult choices made by people during Europe's descent into war, come to a head in the climax of the story in a way that makes this possibly the saddest, most haunting novel about spying that's ever been written. And in the character of Lindsay Phillips Hone creates a brilliant symbol of the duality of the individual, and especially of those caught up in the spy business. Lindsay is, to all outward appearances, the exemplar of all the characteristics and virtues of the English gentleman. His truth is far more complex. And his relationship with his daughter, which might be called platonically incestuous, ends up as a symbol of the dashed dreams of those who believe in an idealized England.

So why is Hone almost forgotten these days? I think part of the reason is that the spy genre has fallen on hard times. Since the removal of the Iron Curtain, novels about the bloody chess match between the intelligence agencies of the East and West have been largely replaced by straight up thrillers about terrorists, which is a change it's hard to argue against based on current events. A more particular reason for Hone's obscurity is that he strays too far into literary fiction. His novels are fully satisfying as espionage stories, but for readers who are familiar with the work of Le Carre, Ambler, Deighton and Julian Rathbone, Hone's elegant, exact prose and fascination with the human heart might seem daunting or distracting. So now that I've exhausted the library's supply of Hones, expect to see me haunting the spy section of your local used book store.
Posted by Cary Watson at 7:04 PM