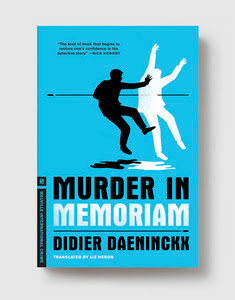 France's conflict in Algeria from 1954-62 is to French culture and history what the American Civil War and Vietnam are to America. It's a conflict that was exceedingly cruel and bloody, and almost led to a coup d'etat in France. Needless to say, writing or talking about this war within France can still raise hackles across the political spectrum, and it's only in the last twenty or so years that France has really begun to have some honest conversations about its involvement in Algeria.

Murder in Memoriam is an agitprop murder mystery. The plot is about the apparently senseless murder of a university student, which, as it turns out, relates directly to the murder of his father twenty years previously. The father was killed on the night of October, 17, 1961, in Paris during the protests by Algerians for Algerian independence. But the goal of the novel is to throw some light on the brutal crimes perpetrated by the Paris police and the government against the protestors. It's estimated that perhaps 300 of these people were shot down in cold blood, beaten to death, or handcuffed and thrown into the Seine to drown. It's a massacre that wasn't spoken about for years in France, and, according to the introduction, this book eventually led to the man who was Prefect of Paris at the time being put under investigation. He was found to be a war criminal who had enthusiastically helped the Nazis round up Jews in France. He went to trial, was found guilty, and sent to prison.

Daeninckx's book works quite well as a mystery, and his Inspector Cadin is an enthusiastic and engaging detective, but the author's real purpose is to rip off the scab that's formed over France's memories of October 17/61 and the role of French citizens in the Holocaust. It's a tall order, but he pulls it off neatly, never sounding preachy or didactic. Algeria is still a hot button topic in France. A film made about the October 17 massacre a few years ago (the title escapes me) shied away from showing just how bloody it was. And a film called Days of Glory (2006) gives France's Algerian colonial troops, called Goumiers, the full Saving Private Ryan treatment for their role in the Second World War. This turns out to be a whitewash job as revealed in Jame's Holland's book on the Italian campaign. It's clear that the French, like any ex-colonial power, have an extreme reluctance to confront the crimes of the past. And for my dual review of two excellent Franco-Algerian themed films, The Battle of Algiers and The Day of the Jackal, click here.
Posted by Cary Watson at 5:36 PM