The Skinny on the Fat Poor and the Slim Rich 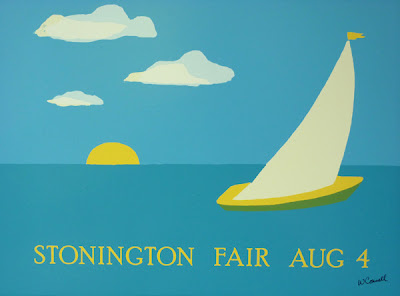 Last week, the wife and I were vacationing in Connecticut, going to the beach, the casinos, and eating far too well. We've been going to CT in the summer for a few years now, generally seeing and doing the same things, but this time, thanks to some rainy weather, we did more exploring than usual. What we found is the town of Stonington, just a few miles to the north of the more famous Mystic. Stonington is one of prettiest towns I've ever seen, filled with characterful, beautifully-maintained homes dating back to the founding of America that have often (according to the plaques on many of the houses) stayed in the same family for more than 300 years. Think of it as ground zero for WASP America.

What makes Stonington of extra interest is the contrast it offers if, like me, you come from a place that's a little rough around the edges. I live in Hamilton, Ontario, a mid-sized city with more than it's share of poor people (more on that issue in this blogpost). If you visit Hamilton the first thing you might notice is that compared to Toronto, its more affluent, next door neighbour, there seem to be a lot of overweight, infirm people who smoke like chimneys, and the elderly almost all seem to be using walkers or mobility scooters or wheelchairs. On some days, Hamilton looks like a giant outpatient clinic.

Stonington is old in all senses of the word. The median age of the residents is probably in the fifties, and the median net worth of Stoningtonians is undoubtedly in the high seven figures. And from the look of the folks in the town this money is all old money. The kind of money that got its start in enterprises like whaling, logging, textiles, shipping, railroads, and, yes, even the slave trade. The townsfolk are the very picture of geriatric wealth and health. There are lots of people past retirement age, but there isn't a walker or scooter in sight, just an astonishing number of septuagenarians power walking or even jogging. My surplus 30 pounds made me the fattest person in town. It's no secret that with more affluence comes better health and less of a gut, but to see it on display like this is still startling. To go from Hamilton to Stonington and back to Hamilton is to realize that the upper and lower classes are now as physiologically separate as they are in terms of income.

Stonington is also a very blissed-out place. People are eager to greet one another, smiles are everywhere, and the overall level of friendliness is off the charts. If I didn't know better I'd suspect that the locals have a lot of Golden Retriever in their DNA. I was taken aback by this warmth until I realized that it's yet another indication of wealth and ease. People like these live their lives having either just come from a pleasurable experience or looking forward to one. This realization came to me while standing on the dock of Stonington's Dog Watch Cafe, watching people take water taxis to and from their boats moored in the harbour. A voice from a ship to shore radio asked for a pickup by saying, "We're anchored by the golf course. Pick us up on the port side." So there you are on your large, comfortable boat enjoying a spectacular view, and you leave that to come ashore to enjoy one of Stonington's excellent restaurants or perhaps just stroll around the town. Like I said, life without any dips in the overall level of blissfulness. Does work get in the way? I don't think so; most people seem retired, and the others, I'm guessing, are still living off the lucre amassed by their 17th century ancestors.

Later this summer the film Elysium, starring Matt Damon, is coming to a theatre near you. It's set in a future in which the wealthy live a pampered existence on a giant satellite orbiting Earth. The rest of us live in squalor down below. For a contemporary, real world glimpse of what such a reality might be like I highly recommend a trip to Stonington.