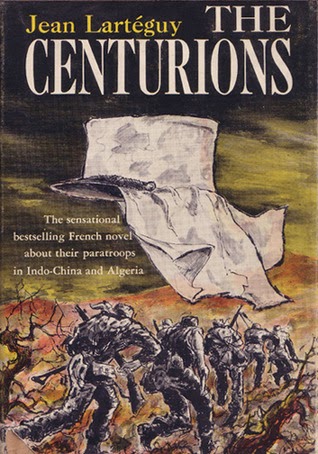 This novel about modern war and soldiering went from obscurity to semi-cult status when  U. S. General David Petraeus lobbied for its republication back in 2011. Petraeus was in charge of American forces in Iraq at the time, and had done a notable job of winning (temporarily) hearts and minds in Mosul, so interest in The Centurions spiked. The novel follows a group of elite French paratroops who are captured after the battle of Dien Bien Phu in Vietnam, spend several years in harsh captivity, return to a France that's ambivalent, at best, about war and colonial adventures, and then end up in Algeria to put down the pro-independence revolt that's breaking out.

There's a hell of a lot going on in this novel, what with dozens of major and minor characters; escapes from Viet Minh prison camps; philosophizing about miltary, moral and political matters; discussions of Communism; romantic entanglements; and sundry scenes of battle and torture. In this respect, The Centurions might be one of the best 19th century French novels of the 20th century. Like Balzac and Zola, Laterguy isn't afraid to roll his sleeves up and paint a big picture on a very big canvas, cramming every square inch with colour, energy and lots and lots of plot. What's best about this novel is its reckless enthusiasm in tackling so many big issues, historical events and disparate characters. The story moves at a gallop but Laterguy doesn't forget to garnish his novel with telling details and asides that remind us that he had first-hand experience of many of the events in the novel.

The politically correct version of what Petraeus found important in this book is its discussion of what's required of a modern Western army if it's to match arms and wits with a popular, especially Communist, uprising. Laterguy's paratroops learn the hard lesson that a modern army has to be more adaptable, more committed, and at least as politically informed as its enemies. The other reason, and a more worrying one, that Petraeus probably loved this book is that it carries a whiff of fascism. Laterguy's modern centurions are shown as disconnected from civilian life, or rather, civilians don't understand or care about the purity of purpose and love of battle that an elite soldier must possess. The Centurions certainly isn't an uncritical celebration of the martial spirit and mindset, but from time to time Laterguy, who had a long and distinguished career as a soldier and war correspondent, seems to envision a future where political decisions are made by the military.

The only real flaws in The Centurions are some sections of dialogue that get too polemical and the portrayal of female characters, all of whom fail the Bechdel test. Laterguy was a fairly prolific writer, and it would be interesting to see more of his books available in English. In the meantime, you can watch Lost Command, the Hollywood adaptation of The Centurions that came out in 1966, starring Anthony Quinn and George Segal as an Algerian rebel(!).
Posted by Cary Watson at 4:43 PM