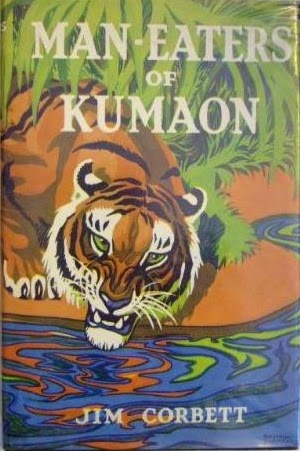 "Gone native" is a term of mild disapprobation that the British once used to describe fellow colonial officials who had taken too great an interest in the people they were ruling over. Going native could mean anything from speaking the local language, eating and dressing like the natives, or even, at the most politically dangerous end of the colonial spectrum, being supportive and respectful of local culture and/or independence movements. Lawrence of Arabia is the poster boy for going native, but the British Empire produced a handful of others who put a human face on colonialism.

Jim Corbett (1875-1955) was one such man. Born and raised in India, he was part of the small army of British bureaucrats, politicians, military men, engineers, and businessmen who managed the jewel in Britain's imperial crown. Corbett was in many ways more Indian than British. He spoke the local dialects, he spent most of his life in a remote area of India, and aside from military service during World War One, he barely seems to have set foot in the UK. Corbett  became famous in the late 1940s with a series of books about India's flora and fauna, the life of the rural poor, and, most famously, his exploits hunting down man-eating tigers and leopards.

Man-eater is almost too mild a term for the animals Corbett faced-off against. These tigers and leopards didn't just kill a few people, in some cases they had killed hundreds. One tiger is reputed to have killed more than 500 people in Nepal before being driven out of that country by the army. It set up shop in India where it killed another 400+ before being bagged by Corbett. These were the Blofelds and Hannibal Lecters of the animal kingdom. Corbett's stories of tracking and killing man-eaters are small masterpieces of narrative tension. Corbett isn't the most poetic or fluid writer, but his clear, workmanlike prose works beautifully in bringing alive the tensions and terrors of tracking man-eaters on foot through dense jungle. What makes Corbett's stories more than just plus-sized hunting pieces are his joyful descriptions of the natural world. He knew and understood everything that went on in the jungle and he brings that knowledge to the reader with a contagious enthusiasm. Perhaps the most notable feature of these hunting tales is the empathy Corbett displays for India's peasants. His writing makes it clear that his primary concern in shooting the man-eaters isn't the challenge it poses but the relief it brings to villages and regions paralyzed with grief and fear. It's Corbett's humanity, his love and concern for India's poorest people, that really makes these books something more than tales of adventure.

Corbett's interest in India's rural poor and working classes is even more evident in My India (1952), a mix of anecdotes about his non-hunting career, scenes from rural life, and an extended piece about his involvement in the hunt for Sultana, a legendary brigand who terrorized the United Provinces in the 1920s. Corbett was asked to take part in this police action because of his prowess as a tracker. Corbett has nothing but respect for Sultana, and he makes it very clear that because Sultana was a member of one of India's "official" criminal classes, his depredations were inevitable and blameless. It's hard to imagine any other British colonial official of that era taking as kindly or understanding a view of Sultana. It's undoubtedly for this reason that Corbett makes a cameo appearance in Sujit Saraf's The Confession of Sultana Daku (2009), a wonderful fictional retelling of Sultana's story (my review here). Corbett's affection for Sultana is also definitive proof that he had "gone native." At some point, consciously or unconsciously, he stopped seeing Indians as colonial subjects but as fellow citizens, and that's what makes Corbett's writings more lasting and significant than if they simply concentrated on hunting and nature.
Posted by Cary Watson at 3:22 PM