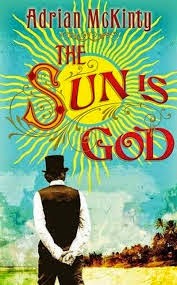 Brevity isn't a quality normally associated with historical fiction. Writers in this field usually measure out their prose in cubits and furlongs, with innumerable bits and bobs of historical detail clinging to their plots like burls on an oak tree. And then we have The Sun is God. Adrian McKinty is a crime/mystery novelist whose stories have always had contemporary settings. This novel (based closely on a true incident) has a crime and a mystery at its heart, and even a detective, but I'd come down on the side of it being historical fiction rather than a mystery novel. And it's quite short.

The setting is the colony of German New Guinea in 1906. A smallish group of Europeans, mostly German, calling themselves "Cocovores" are living on a small island, subsisting entirely on coconuts, bananas and a lot of sunbathing (they're also nudists). The Cocovores are a cult, in fact, and believe that their simple, pure lifestyle will make them immortal. One of their number dies under mysterious circumstances. The local German authorities (it's a very small colony) are forced to turn for investigative help to Will Prior, an ex-member of the British military police who's washed up in New Guinea after being kicked out of the army. Will goes to the Cocovores' island along with a German official and a Miss Pullen-Berry, an intrepid English traveler and journalist. The island reveals some dark secrets, Will faces death and danger, and the mystery is (mostly) solved.

Although the mystery plot gives the novel its backbone, the meat of the story is its look at one of the psychological and philosophical turning points of the modern age. McKinty has managed to pack into this one small, historical incident a lot of the themes that would define the 20th century. Let's begin with Will, who is psychologically damaged from taking part in a massacre of starving black South Africans being held in a British concentration camp. In one horrible moment Will has seen the pointy end of repressive colonialism and industrialized state terrorism, two isms that will metastasize in the decades to come. Will's flight from South Africa is an unspoken resistance to what the British government is doing. And the Cocovores are one of the earliest expressions of the individualism, narcissism, and utopianism that characterize the cults, counter culture, and alternative lifestyles that grew apace over the next several generations. In his descriptions of the Cocovores McKinty nimbly references aspects of future cults such as Jim Jones' Peoples Temple and the Heaven's Gate cult.

The Cocovores are the children of Darwin and Freud and Nietzsche, something that they're very aware of. They are among the first people of the 20th century to take the view that they can and should live outside the control of established states, religions and philosophies; they are the architects of their own universe, albeit one that's demented and reliant on cheap native labour. In the Cocovores we also witness the true believer fanaticism that leads to persecution and murder; on a small scale here, on an epic scale a few years down the road in Europe.

As mentioned earlier, McKinty keeps his story lean and doesn't overindulge in historical scene-setting. Instead, he lets his prose do some that work, as shown here:

Bethman swung a clumsy haymaker at Will's face, which he easily dodged before cleaning Bethman's clock with an upper cut to the point of his prominent chin. The German fell backward, poleaxed by the blow.

The use of semi-archaic words such as "haymaker", "clock" and "poleaxed", and the Boys Own Paper tone of that passage, take us back in time without the addition of distracting historical asides. The Sun is God isn't an exercise in nostalgia or a showy exercise in historical research, it's a sharp, piercing look at an unlikely group of people (for the time) who form a kind of template for the century to come. The only comparison that comes to mind are the Mamur Zapt novels by Michael Pearce (my review), which are marketed as mysteries but are more about colonialism. In any case, McKinty is working at a higher literary level than Pearce. And here's where I contradict myself; as much as I enjoyed the economy of McKinty's writing, in retrospect I wanted the novel to be a bit longer. The back stories of the Cocovores cried out for more detail; these are people who have stepped far, far outside the mainstream so the inner journeys that brought them to New Guinea almost demand a fuller description. That aside, The Sun is God is a refreshing example of historical fiction that achieves a lot without doubling as a cinder block.
Posted by Cary Watson at 12:30 PM

Many thanks for the review, Cary.

And you're right I deliberately kept it brief. I cut about 10,000 words out of the final draft that I thought were too indulgent. Maybe in a future ed. I can put them as a saw of directors cut appendix or something...

Your welcome. Another 10k words sounds fine to me.

and many happy returns (of yesterday).
:-)

What an unusual combination of elements.