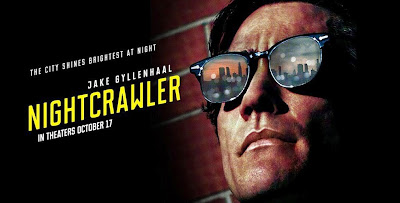 It was argued in the documentary The Corporation (2003) that corporations think and behave like psychopaths. Nightcrawler takes the view that inside every psychopath there's a raging capitalist struggling to get out. The title character is Louis Bloom, who when we first meet him is driving a crappy car (this already marks him out as odd in Los Angeles) and stealing metal for a living. In the few, short scenes that begin the film we learn all we need to know about Louis: his large, moist, unblinking eyes are always on the lookout for whatever can earn him a dime or a dollar. He's confronted by a security guard while stealing some chain link fencing and notices that the guard is wearing a large, shiny watch. Like some kind of crazed thieving magpie he wrestles the guard to the ground and in the next scene we see Bloom wearing the watch. Is the guard dead or injured? We don't know because the story is told from Bloom's POV, and he certainly doesn't care what happens to other people.

Bloom happens upon a freelance videographer filming a dramatic car crash and learns that these freelancers can make good money selling their footage to local news stations. Cue the demented Horatio Alger story as Louis rises to the top of the freelance news heap by being more aggressive, more cutthroat and cheaper than any of his competitors. He hires an assistant, Rick, who's living in a garage, and patiently explains that he's offering an unpaid internship because the experience he'll get is worth more than money. Bloom eventually, and grudgingly, gives Rick $30 for each all-night shift. The two of them listen to an emergency services scanner and race other videographers to car crashes, fires and crime scenes. Bloom's ruthlessness eventually leads to him manipulating the news instead of just recording it.

Bloom is an odd amalgam of Travis Bickle from Taxi Driver, a reptilian version of Phil Silver's Sgt. Bilko character, and Chance from Being There. He has no interior life (his stark, barely furnished apartment is a window to his soul), he's just a feral entrepeneur who's learned to mouth business platitudes gleaned from self-help books and seminars. He's matched by Nina (Rene Russo), the producer of a morning TV news show. She'll accept raw video material from Louis no matter how tainted, how immoral his methods are in getting great footage. Nina is in the minor leagues of the TV industry and is desperate to keep her job. Rick plays the role of the oppressed worker who is ruthlessly exploited and then cast aside.

A lot of Nightcrawler is a simplistic, connect-the-dots analogy about the way business works (something I'm in agreement with), but the film still works exceptionally well as an atmospheric thriller. The action takes place almost entirely at night, and Los Angeles has rarely looked so beautiful and yet menacing. The film also benefits from a constant and underlying tension thanks to Bloom's unpredictable ruthlessness, and the finale is a fine piece of action choreography.

On the debit side, the lampooning of local TV news is pretty stale. This subject has been done to death, and Nina is, unfortunately, one in a long line of dragon lady TV executives. The Bloom character is compelling to watch but he's never more than a polemical argument made flesh and blood. And I could have done without the police detective who is given dialogue recycled from every cop show ever. Finally, it's nice to see a nasty, dyspeptic, criminal view of life up on the big screen again. Those kinds of films were the heavy hitters of the 1970s and I'd like to think this marks a comeback for them.
Posted by Cary Watson at 5:19 PM

I wonder what elements make those kinds of films popular?