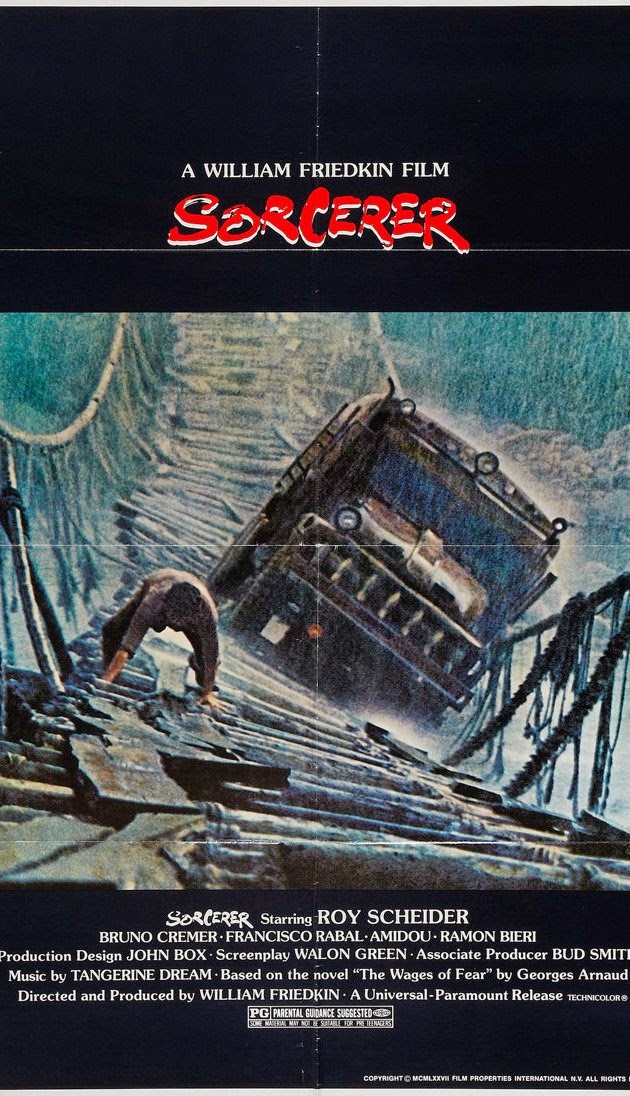 According to popular legend (or possibly revisionist history) the box office failure of William Friedkin's Sorcerer can be blamed on Star Wars, which opened at roughly the same time and sucked, as it were, all the commercial and critical air out of the room. I saw Sorcerer when it first came out and didn't think much of it, and now, nearly forty years later, I saw it again on DVD and had my original opinion confirmed: this is a poor film. I didn't like Star Wars very much, but it turns out that it was the better film.

The belated critical recognition that Sorcerer has received seems to be more about nostalgia for that brief period in the 1970s when American cinema, led by directors such as Friedkin, Martin Scorsese and Peter Bogdanovich, seemed to be on the verge of a golden age of auteur filmmaking. Heavily marketed, big budget, populist films like Star Wars and Jaws ended up setting the template for Hollywood in the decades to come, and for a lot of film critics and fans that represents the death of artistic American cinema. Be that as it may, nostalgia shouldn't blind any one to the fact that Sorcerer is a bloated, incoherent, and unnecessary remake of the brilliant The Wages of Fear (1953) by Henri-Georges Clouzot.

In case you haven't seen either film: four men, all from different parts of the world, are on the run from the law (with one exception) and have ended up in a hellish Central American town where the only employment is with an oil company. In order to get enough money to escape from the town the four agree to drive a load of nitroglycerine in two trucks to an oil well site that's burning out of control.  Sorcerer stumbles right from the start by giving us four vignettes to introduce the four desperate men. The original film began in the town and we learned their back stories as the story progressed through their interactions with each other. Friedkin takes the more obvious approach by showing the various crimes that caused these men to flee their homelands. So we get sequences set in Jerusalem, New Jersey, Paris and Vera Cruz. This lengthy introductory portion of the film doesn't tell us anything we couldn't have learned from the men themselves in the town; it all feels like an excuse to mount action scenes in various international locations. A terrorist bombing in Jerusalem shows some visual flair, but the New Jersey intro involving Roy Scheider's character is clumsily choreographed. The Paris sequence is dull and overlong, and the Vera Cruz episode turns out to be confusing because the character it introduces, Nilo, is given no reason to go on the run. We have no idea why he turns up in the town or why he volunteers to drive one of the trucks.

Another problem with the introductory vignettes is that once the men get to the town, no character development takes place. Friedkin seems to think the vignettes did all that work, so that means the final two-thirds of the film is virtually dialogue-free, at least when it comes to our four leads. This kills almost all the tension in the film because we aren't invested in these characters in any way. They're ciphers. Scenes that might otherwise be nail-biting become inert because it's hard to care if these anonymous characters live or die.

Some of the Central American locations are visually arresting, and a sequence involving the trucks crossing a rope bridge is impressive, but on the whole Sorcerer doesn't hold a candle to the original. The Wages of Fear, despite its vastly lower budget, is far more inventive both visually and in terms of storytelling. Sorcerer puts its big budget up on the screen, but it feels like the work of a B-movie director who doesn't quite know what to do with all that money.