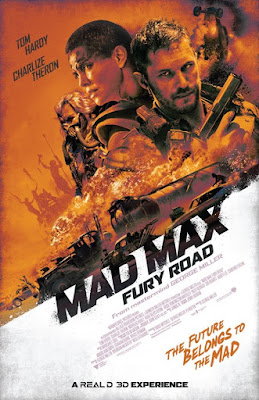 It seems that Hollywood has learned something from the fast food industry. Until recently, burger chains and the like competed on price, but over the last decade their strategy has shifted to inventing ridiculous and/or oversized food items that attract publicity as well as diners. That's why we get things like the Krispy Kreme burger or KFC's Double Down sandwich, and so on and so on. Fury Road is the supersized, high fat and sodium content addition to the Mad Max franchise. Instead of one kick ass lead character (Max), why not two? Why cheap out with only one evil, ugly, deranged warlord? Let's have three! And keep the car chases virtually continuous, sort of like the free refills at McDonalds' pop machines.

Fury Road isn't bad, and by the standards of most contemporary action films it's quite good, but measured against the standards of the first two films in the series (we'll try and forget the egregious Mad Max Beyond Thunderdome), it's a bit of a disappointment. To begin with, even though the car chases are bigger and longer, they aren't any cleverer. In fact, you could say they've been dumbed down a bit since this time around guns play a larger role in the action. In Road Warrior bullets were a scarce and precious resource, to be used only in extreme occasions. Here our heroes use them, in relative terms, with abandon. And the problem with unending car chases is that after a while you run out of ways to attack and crash vehicles. The violence is on a bigger and louder scale (although not R-rated, unlike the first two films), but it lacks the spark of demented originality the first two films had.

The oversupply of goodies and baddies means that characterization is an afterthought. Furiosa, the Charlize Theron character, is all-steely resolve, all the time. And Max, the titular star of the show, is reduced to a weapon or tool to be used only during action set pieces. He barely speaks, and, unfortunately, when he or Furiosa do say anything they're given to pompous utterances about looking for "hope" and "redemption." The Warboys and their leader Immortan Joe are visually splendid, but with so many characters involved in the action there isn't time to develop Joe into a memorable villain. He does have a respiratory problem, however, something that's de rigueur for all your top villains.

On the plus side, Fury Road is an emphatically feminist narrative with Furiosa leading the way against Joe's women-enslaving death cult; a cult that bears a strong resemblance to groups like ISIS and the Taliban. The use of a starter pack of supermodels to play Joe's "brides" undercuts the feminism somewhat, but that's only a minor glitch. Charlize Theron definitely earns her stripes as an action hero, and a Furiosa sequel seems both inevitable and welcome. As for Tom Hardy, he needs a sequel just so his character can be properly introduced.