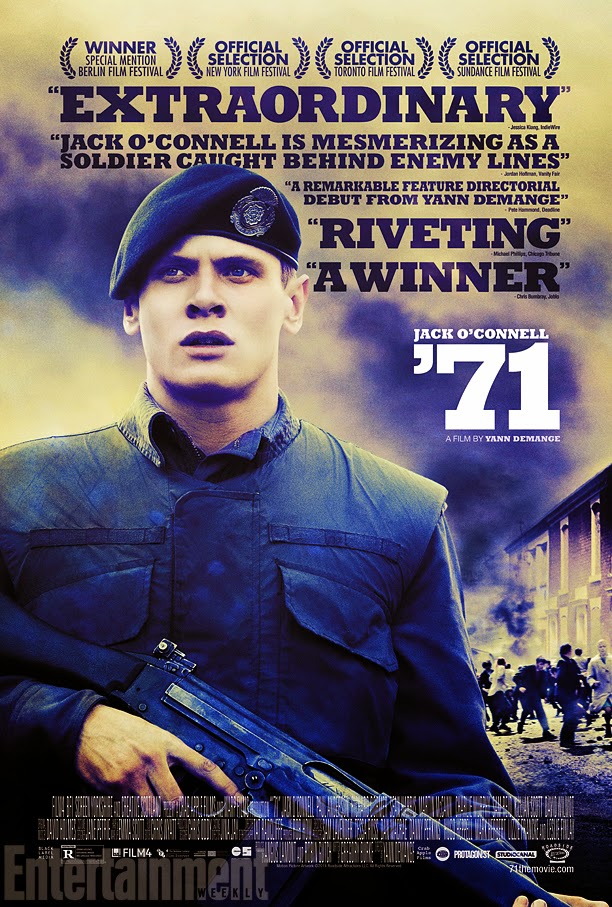 If you want to make a decent thriller these days, your first step to success is to make sure your budget is low. The lower the better. A budget that wouldn't pay for Robert Downey Jr's per diem on The Avengers: Age of Ultron is ideal. Minuscule funding means your film can't rely on extravagant action set pieces or big stars like, uh, Robert Downey Jr. Instead of those two crutches, your film will have to focus on character and plot, on the writing, in other words. '71 is a beautiful example of this.

The story is set in Belfast in, of course, 1971. The Troubles have reached a full, rolling boil, and a raw group of Brit soldiers have been sent out into a Catholic area to provide protection for a group of RUC officers (the Protestant-dominated police force loathed by Catholics) who are conducting a raid on a house. A riot ensues, one soldier is killed and another, Pvt. Gary Hook, becomes separated from his platoon and must go on the run through enemy territory. Hook sticks out like a sore thumb thanks to his accent and uniform, and nothing has prepared him for this kind of situation. The action takes place over one night, and Hook becomes the prize quarry for two different IRA groups, a trio of ruthless MI5 men, and his own platoon.

The hunt for Hook is deftly handled. The different groups looking for him have motives that aren't immediately apparent, and the double-crosses and deaths soon begin to mount. The different narrative strands are kept coherent, and thanks to the low budget, there's no time wasted on pointless relationships or redundant background information. In short, the strength of '71 lies in the script's efficiency and attention to detail. One standout example of this is our brief intro to Hook. Before he arrives in Northern Ireland we learn (or infer) from only a few brief scenes that Hook is from a poor background, has no girlfriend, and his only relative is his young brother who's living in an orphanage. This intro gives us a rooting interest in Hook, but it stops well short of an assault on our tear ducts, which a fatter, lazier film might have done. Even minor characters are given a polish that makes them more than predictable storytelling pawns. The platoon's commander is initially presented as a bit of an ineffectual, upper-class twit, but at the end he's got more backbone and more of our sympathy. And what might be the most memorable character is a Protestant boy, who can't be older than ten, who has been transformed by the Troubles into a menacing, pint-sized Liam Neeson.

What gives the film a lot of its tension is that Hook is played by a relative unknown. Put a big star in this role and the audience knows he's going to survive until the end. Stick a nobody in the role and now we're not so sure. Also, I wonder if calling the soldier Hook isn't an ironic nod to the Pvt. Hook in Zulu? The latter film is about heroic empire-building, while this one is about an empire falling apart. And that brings us back to the budget. A Marvel-sized payroll would have given us superfluous characters, action scenes that went on too long, and preening superstars. A low budget, like living on a low income, forces filmmakers into smart and creative choices. They can't paper over plot holes with money. The French film industry has been cranking out smart action-thrillers like '71 for years, and I can only wish there were filmmakers doing the same.
Posted by Cary Watson at 2:52 PM