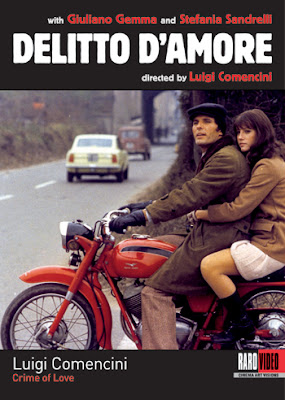 In the 1960s and '70s Italian cinema seemed to specialize in reinventing film genres from other countries. The spaghetti western was a deconstruction of the American western with an added dollop of Japanese samurai films; giallo films were Hitchcock with more blood and less humour; and poliziotteschi were American cop noir films like The French Connection given a frenzied and feverish makeover. Or to look at it another way, Italians were the counterfeit designer label purveyors of the film world. But this ersatz cinema was always vastly entertaining.

Delitto d'amore is Love Story (1970) redone with bonus Marxism, environmentalism, political violence, labour activism, and angry debate about Italy's north-south divide. The lovers are Nullo and Carmela, both of whom work in a noisy, smoky metalworks factory in Milan. Nullo is a northerner whose family are all anarchists. Carmela and her very traditional Catholic family are recent arrivals from Sicily. They live in a crowded hovel in a part of town that looks as if it would be more habitable if it was bulldozed. Carmela falls in love with Nullo at first sight, he takes a little longer to come around to her charms. They want to get married but fight over her demand for a religious marriage and his insistence on a civil marriage only. Carmela gets a fatal illness from toxic fumes in the factory, and marries Nullo in a civil ceremony on her deathbed. The last shot of the film has Nullo walking through a crowd of workers protesting the factory's working conditions, and as he goes off-camera we hear a pistol shot as he shoots (we assume) one of the factory managers.

There are a lot of raw edges in this film, but it's charm and power comes from its dogged enthusiasm in embracing every hot button issue of the day, and subtlety be damned. Pollution? How about a scene by a river that was once pristine (according to Nullo) but is now foaming with industrial effluents and bordered by trash heaps. Poverty? Carmela's tenement is horribly overcrowded and surrounded by wasteland. The screenwriter was Ugo Pirro, who, not surprisingly, also did the script for Investigation of a Citizen Above Suspicion (my review). This was a guy who knew how to tackle themes like social injustice and make them entertaining.

The film really has a bit too much on its plate, but that's par for the course in Italian films of that era. Some of the giallos of that period (Death Walks on High Heels comes to mind) had enough plot for three or four movies. Considering how politically-neutered Hollywood filmmaking has been over the years, it's always refreshing to watch a film that sinks its teeth into big issues and won't let go. The location photography is great. Milan in winter is wrapped in perpetual fogs and mists, and as is usual in Italian films of that time, the cinematographer seems to go out of his way to avoid locations that show the country's natural and architectural beauty. The acting is all over the map. Stefania Sandrelli is very good as Carmela, but Giulano Gemma is a bit meh. Like too many leading men from '70s Italian cinema, Gemma is a pretty face and a cool haircut in search of an acting class. He tries, though.

Delitto d'amore (Crime of Love in English) isn't a classic, but it's energetic, angry and clumsily entertaining. The gold standard for films about the Italian proletariat and labour strife has to go to The Organizer (my review), but there are several other films in a similar vein (1900, The Working Class Goes to Heaven, The Railroad Man) so I'm thinking there needs to be a genre classification for them. How about classe operaia films?

Review of Plot of Fear
Review of Almost Human