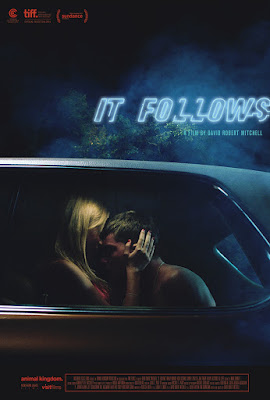 The horror genre has always been kind to directors who want to showcase a particular style or indulge in directorial affectations. Directors from Jacques Tourneur to Brian de Palma to Stanley Kubrick to Sam Raimi used horror films to highlight their eccentric talents. It Follows takes the generic 1980's horror film (Halloween is the template here), passes it through a film school aesthetic, and what comes out at the other end is stylish, but ultimately rather dull.

The terror at the heart of teen horror movies isn't really a maniac wielding something sharp and stabby, it's sex. It's old news that this genre revels in t & a, punishes its sexually active characters with gruesome deaths, and makes the virginal into heroes. It Follows has the clever idea to cut to the chase by having its titular nasty be a new kind of STD--a sexually transmitted demon. If you have sex with an "infected" person they will pass on a curse to you. The curse is that you'll be followed (at a walking pace) by an evil spirit that will kill you if it catches you. The spirit or demon can take any human form, but is only visible to its victim. By having sex you can pass the demon on to the next person. So there it is, all the dread, guilt and anxiety teens feel about sex wrapped into one tidy concept. The execution is the problem.

The story unfolds in a very low-key manner by the standards of the genre. Jump scares are kept to a minimum, characters have aimless conversations that don't include the use of word "dude", and very little is done in a rush. It all has the feel of something done in film school that's self-consciously trying to avoid the cliches of the genre but can't find anything better to replace them with. The cinematography is moody, and the director plays with the time period it's set in (is it contemporary? Is it the '80s?), but the visual and tonal conceits can't paper over the weak internal logic of the story. We don't get a back story to the curse, which is OK, but the logic of how the curse works and how the demon is defeated seems arbitrary. Also, at the end of the day this is essentially a zombie movie with only one zombie, and I hate the zombie genre.
Posted by Cary Watson at 2:13 PM