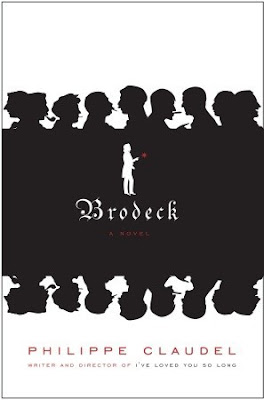 The French know a thing or two about mobs. In fact, they pretty much invented the modern mob back in 1789, and since then they've stayed in game shape with major mob events in 1830 (the July Revolution), 1870 (the Commune), 1968 (the May riots) and, most recently, the 2005 riots in the country's banlieues. It comes as no surprise, then, that a couple of French authors should write novels that dissect the psychology of mob activity.

Brodeck is set in an alternate reality Europe that mostly resembles Austria or Germany in the 1930s. The title character lives in a small village high in the mountains where he works as a low-level government functionary. As the novel begins, Brodeck is summoned to the town's inn where he learns that almost all the men in the village have murdered a man know only as the Outsider. The men ask Brodeck to write a report on what happened in the town that led to the killing of the Outsider. The narrative now skips back and forth between Brodeck's investigation and flashbacks to his grim and tortured life before arriving in the village.

Claudel's novel is a slightly surreal, fable-like meditation on all the ways people can find to despise and persecute those unlike themselves. The Outsider who ends up being killed is emphatically more symbol (a saint? a holy fool? God?) than a character. He's odd and eccentric, mostly silent, and it feels like he's dropped into the village after an adventure in one of Italo Calvino's fabulist novels. The slightly whimsical nature of the Outsider is offset by Brodeck's back story, which is a litany of some of the 20th century's showcase atrocities--concentrations camps, pogroms, persecution, and total war. Claudel's novel veers towards the didactic from time to time, but he more than makes up for it with some wonderful world-building. His alternative Europe is artfully done, and his detailed descriptions of the village and its citizens are beautifully realized.

Eat Him if You Want is the nasty, brutish and short take on mob behavior. It's actually an almost blow for blow recounting of a true event in French history that took place in 1870. The setting is a small village during a summer fair. Word has come from the north that the war with Prussia, only a few weeks old, is going badly for France, which is simply more bad news on top of the drought which is gripping the region. A local haute bourgeoisie man, Alain de Moneys, comes to the fair to conduct some business and a few members of a semi-drunken crowd think (wrongly) that they hear him say something pro-Prussian. What starts as anger among a few drunks metastasizes into an orgy of violence directed against Moneys. For over two hours he's beaten and tortured in ways only French peasants could dream up, culminating in his being burnt alive and, yes, partially eaten. His death was the definition of senseless, and many of his attackers were later arrested and executed or sent to penal colonies.

No gruesome detail is spared in Teule's novella, but the blood and horror is leavened with black humor and a tone of ironic detachment that makes the savagery and madness on display all the more affecting. Teule doesn't ask us to draw lessons from this historical incident, or even try to understand more than the simplest of motivations behind the attack. He simply shows in clinical detail how a mass of people can turn into not just killers, but brutal architects of pain.The worst thing about the crime is that it reveals how imaginatively cruel the average person can be and how willing they are to put their sickening fantasies into action.

Both novels are in the Premier League of harrowing, and not to be read on a crowded subway train where people are likely to be testy and react badly if you bump into them while your nose is buried in one of these books. And kudos to Gallic Books for bringing out Eat Him if You Like and a raft of other French novels in translation which I'm slowly working my through. Allons-y!

The true writer can make even his BS SOUND erudite. :-)