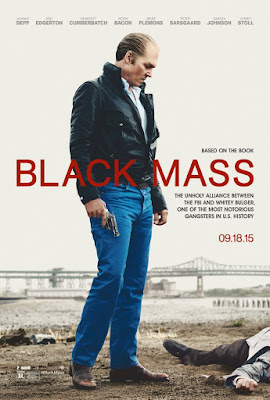 If Black Mass was a pizza it would only have one topping; if it was a car it would be a base model Toyota Corolla; and if it was a day of the week it would be Wednesday. Black Mass is the blandest gangster film that's ever been made. It's not dull, it's not bad, but it leaves absolutely no impression on your cinematic palate. The film tells the true story of Whitey Bulger, a small-time Boston gangster who became a big-time gangster in the 1980s thanks to the tacit support of the FBI, who were relying on Bulger to give them intel on Boston's sole mafia family. Bulger gave them very little real info, but the protection and tips he got from the FBI (and one agent in particular) let him rule Boston's underworld for more than a decade.

Where Black Mass goes wrong is in concentrating on the FBI's involvement with Bulger. It's true that this is what makes the Bulger case of news interest, but it has very little cinematic value. The appeal of gangster films lies in the gangster lifestyle. Goodfellas is a masterpiece because it shows the visceral appeal of life in the mob, especially how that life was for street-level hoods. The Godfather also shows us a gangster lifestyle, albeit one that's built around an operatic plot and an acidic attack on the myth of the American Dream. Black Mass goes through the motions of showing Bulger whacking some people, beating up others, and generally being feral and threatening, but we don't get any clear idea of what his criminal empire was built on. His downfall began with his involvement with jai alai games in Florida. The film does a terrible job of telling us what jai alai is and how Bulger profits from it. And Bulger's underlings are barely developed. We register their presence, but they might as well be nameless extras for all the impact they have. Instead of describing the gangster life, the film gives us scene after scene of guys sitting around tables in homes and offices doing nothing but talk, talk, talk. At the halfway point in the film I began to feel I was watching some kind of dramatic re-enactment show on the History Channel.

The actors all turn in capable performances, but they're held back by a script that lacks wit and energy. All the salient points in Bulger's career are covered, which is fine for an essay, but not so charming in a film. And one odd thing I noticed is that either the actors or the scriptwriter have no ear for swearing. Everyone curses up a storm, but it always sounds awkward and forced. Goodfellas evidently holds the record for sweariest film of all time but in that film the expletives felt natural and almost poetic. In Black Mass the curses are there to enliven otherwise dreary dialogue sequences.
Posted by Cary Watson at 10:42 AM