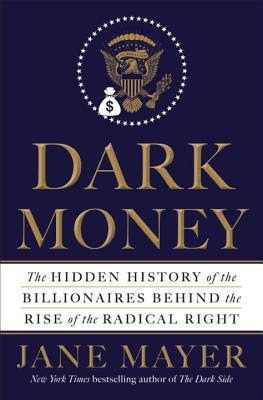 There is no getting around or understating the fact that Charles and David Koch, the multi-billionaire brothers from Kansas, have been engaged in a campaign of unarmed insurrection against the American state since the 1980s. Through their underwriting of dozens (hundreds?) of advocacy groups, think tanks, academic institutions, and political campaigns they have advanced the cause of what could be called the abridgment of American democracy. They have spent hundreds of millions of their own dollars to achieve this, and have solicited/badgered their plutocratic peers into giving as much and more to support their goal of reducing the role of government to something resembling that of a concierge at a luxury hotel--a mere functionary tasked with keeping the unwashed out of the lobby and satisfying every whim of the guests.

Jane Mayer has done a remarkable and tenacious job of showing all the roots and branches of the Koch brothers propaganda war. Aided by like-minded billionaires such as Sheldon Adelson, Richard Mellon Scaife, John Menard, and a torch- and pitchfork-bearing mob of mere centimillionaires, the fruit of the tree planted by the Kochs and watered with the furious tears of anti-tax tycoons is that slouching beast known as the Republican Party. What was once upon time a conservative, but mostly rational, political party has now become the marionette and mouthpiece for a cabal who seek to turn the political/capitalist clock back to roughly 1900, which, in their view, was a golden age of capitalism unfettered by unions, taxes or government regulations.

Mayer makes it very clear that the Kochs and their allies don't just want a diminution of the government's role in society and the economy, they want it banished from the playing field altogether. The John Birch Society was the incubator for this extreme philosophy back in the '60s, but it took the Kochs to give it mainstream appeal and respectability through the GOP. The Kochs achieved this by creating an entire ecosystem of advocacy and political organizations that promoted and funded policies and politicians that were in accord with their fanatical worldview. The proof of their success is that the GOP is now not so much a political party as it is a counter-revolutionary movement seeking to rollback all progressive policies enacted since the end of World War Two.

Although taxation and government regulations are the main targets of this Koch-led guerilla war, they work equally hard at deconstructing democracy through the gerrymandering of congressional districts and by curtailing voters rights. The Kochs and their allies are mostly concerned with enriching themselves, but they also want to create a new American state in which corporations become the fourth branch of government, surpassing in power the legislative, executive and judicial. It's arguable that that has been the case in the U.S. for quite some time already, but America's billionaires want to rig the democratic game so that their power cannot be challenged by the judiciary or through the ballot box. Politicians have been for sale for a long time, but the Kochs want to take things to the next level by disenfranchising the poor and establishing legal precedents that give corporations and the wealthy de facto control over the electoral process.

What the Kochs are up to sounds, at times, like some kind of conspiracy theory spawned by social media, but Jane Mayer is meticulous in uncovering all the layers in this proto-parallel government that's made up of interlocking foundations, charitable trusts, PACs and advocacy groups. This kind of detailed reporting always risks being tedious, but Mayer is wonderful at balancing facts and figures with a strong sense of narrative structure.

The question that comes to mind from reading this book is why has the U.S. lead the developed world, especially in the postwar era, in producing so many wealthy people with an ideological blood lust for less government and more, far more, profits? I think there are two possible answers. The first is that, as Calvin Coolidge observed in the '20s, "The business of America is business." The foundation myths of the United States like to dwell on warm and fuzzy concepts such as freedom, democracy, opportunity and escape from persecution. It's more accurate, if less romantic, to say that most people came to America for one reason only: to make money. People didn't uproot themselves and make dangerous sea voyages to an unseen, unknown land for the chance to vote or engage in free speech. They came because America offered economic opportunities that couldn't be found in their own countries. America was populated from the beginning with people who had an intrepid desire to better themselves financially, and this became the country's dominant cultural theme. And for some of the richest Americans, financial self-aggrandizement became a quasi-religious impulse; in fact, in the last several decades capitalism and Christianity have become officially linked in many evangelical churches through the so-called prosperity gospel. The Kochs and others of their ilk see themselves as saintly warriors in the holy war against government.

The flip side to the American dream was slavery, and this institution, which shows capitalism in its rawest form, has affected American's view of labour and capital to this day. Slavery, and the Jim Crow-era that followed up until the 1960s, produced a permanent economic underclass that could be identified by race. Blacks were deemed an inferior race, and it followed that their poverty was a natural by-product of an inherent lack of intelligence and ambition. To be black was to be poor, and to be poor was to be black. For white America, economic failure was regarded as a failing on a personal level; it marked one out as a lesser being, it made you black. It wasn't seen as an inevitable by-product of capitalism. In Europe, the working classes, who weren't tripped up by racial questions, grasped the fact that economic hardship and inequality was simply part of the capitalist equation, and they organized and backed unions and political parties that fought directly for their interests. In the U.S., the racial fear of poverty and economic disadvantage was a prime reason a true worker's party (on a national level) never emerged. So the sense of shame, horror and fear that Americans have viewed life at the bottom of the economic ladder played right into the hands of people like the Kochs. If the poor and working poor see themselves as lesser Americans, lesser humans, it follows that those at the top are the best and brightest, and to deny them their wealth and power is simply going against nature. It's this warped logic that helps explain why the white, populist, working-class Tea Party (a quietly Koch-founded movement, as Mayer points out) metastasized into the Red Guard of the GOP. Against their better interests Tea Party supporters embrace the brutalist capitalist ideology of the Kochs as a way of distancing themselves from the poverty they fear and loathe.

Many commentators have made the point that during this election cycle the Kochs have ended up on the outside looking in as Donald Trump has swept aside their preferred candidates. The Kochs may have lost the battle but they've won the war. Politics is broken in the United States, and it's due in no small part to the Kochs. The American right is now an anarchic crew of ideologues who want to cripple federal and state governments. These are vandals, not politicians. Jane Mayer's book is an invaluable and astute guide to the structure, purpose and character of this counter-revolution, and it probably stands as one of the most important political books written in the last ten years. The Kochs certainly think so because they tried very hard to silence her. There's no higher recommendation for the book than that.
Posted by Cary Watson at 12:25 PM

Nicely done JC. But maybe their greatest success is that much of the 'free market' BS once considered the domain of the far right has long been hegemonic in the Democratic Party as well.