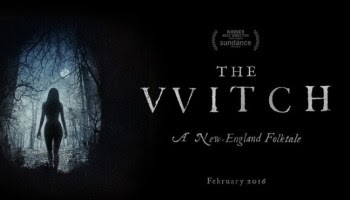 Of all the qualities that help make a horror movie succeed, acting usually isn't at the top of the list. Editing, cinematography, makeup and special effects are normally the most mentioned aspects of horror films. In The Witch, the acting is everything. The setting is colonial America in the early 1600s, and the story focuses entirely on a family of Pilgrims who are trying to farm (not very successfully) in the middle of the wilderness. An opening scene establishes that they have been exiled from a Pilgrim settlement due to some transgression on the part of William, the head of the family. Based on how he behaves with his family, it seems likely that his sin was being too pious for his peers, if that's possible. One day the family's infant son is snatched away by a witch, and so begins the disintegration and destruction of the entire family.

The story is rigorously straight-forward, steeped in folkloric imagery, stripped of all modern sensibilities, and doesn't have any of the cliche plot twists and jump scares that are standard issue in most modern horror films. This is a true horror film in that what rivets our attention is the horror of what's happening to the characters, not the scares inflicted on us by things jumping out of the dark or crashing sound effects or blood-soaked visuals. This makes the acting all the more important because it's the actors who largely carry the burden of transmitting the horror to the audience. The small, ensemble cast is superb, and writer/director Robert Eggers has given them rich, chewy, period dialogue that the actors make sound completely natural. There isn't one performance that stands out from the others, but Harvey Scrimshaw as Caleb, the eldest son, deserves special mention for a scene in which he wakes from a fever that is so intense it'll raise the hairs on the back of your neck.

The acting is supported by the look of the film, which is sombre, gloomy and classically understated. Showy camerawork would have taken the audience out of the reality created by the story and the actors, so kudos to the director for that decision. Another subtle and effective touch is that each character is given a flaw that they keep hidden. The father is an incompetent farmer; the mother resents having come to America; the daughter isn't quite pious enough; the son is casting lustful looks at his sister; and the young twins are out and out holy terrors. This isn't a simplistic crew of God-bothering Pilgrims. All in all, the best film I've seen so far this year