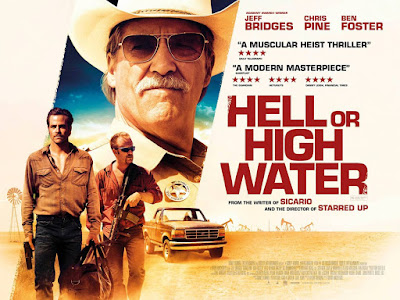 If this summer's film slate of superheroes and reboots and sequels, all of them CGI-heavy, has tired you out, cast your eyes on Hell or High Water. It's a modern western set in the driest, most destitute corner of Texas that borrows tropes from the horse-powered westerns of yesteryear to tell the story of two brothers who rob banks to pay off the mortgage on their mother's land.

The brothers are Tanner and Toby. Tanner (Ben Foster) is a career criminal and all-around hell raiser. Toby (Chris Pine) is a divorced dad who needs to pay off the mortgage on his late mother's land. The land isn't worth much, but the oil underneath it, which has just been discovered, is worth $50k a month. But if he can't pay off the mortgage the bank will get the land and the oil. Toby has not, we gather, been a good husband or father, so as an act of redemption he wants to put the land in a trust for his kids once he's cleared the mortgage. The amount he needs isn't much, but it involves robbing banks in a variety of flyblown towns across west Texas. Texas Ranger Marcus Hamilton (Jeff Bridges) is soon on their trail.

What's striking about this film is its conscious effort to harken back to the American filmmaking aesthetic of the late 1960s and early '70s. Films like Bonnie and Clyde and Badlands are obvious visual influences, also the use of local, non-professional actors in small roles. Director David Mackenzie has clearly absorbed the feel of those films and tried to bring them back to life, particularly in the handling of the brothers. Tanner and Toby are the kind of antiheroes that were common in the '70s. They aren't well-equipped in temperament or skills to deal with normal life and have ended up living on the fringes of society, which also makes them unconsciously anti-establishment, a key element of the films of that era.

The most modern aspect of the film is its emphasis on the poverty and despair gripping this part of world. Billboards for payday loan  and debt relief companies dot the landscape, most businesses are shuttered, and the population seems either very old or very unemployed. This is Tea Party America, even though the film never makes any direct political statements along these lines. The bad guys, as in so many old westerns, are the banks, who are eagerly foreclosing on anyone and everything. A briefly glimpsed piece of graffiti at the beginning of the film neatly captures the film's political viewpoint: THREE TOURS OF IRAQ BUT I NEVER GOT A BAILOUT. Sadly, the film is content to just blame the banks rather than drilling down deeper to the politicians who are the banking industry's enablers. The western tropes are cleverly woven through the film, especially during a climactic bank heist that results in an impromptu posse chasing the brothers out of town, and, like the legendary James brothers, Toby and Tanner receive protection from some of the locals. Nobody likes banks.

But this isn't a perfect film. The character of Tanner is too much of a generic crazy cowboy, and Ben Foster overacts accordingly. Chris Pine as Toby is fine, but it's not a very demanding role since he's mostly asked to just look hurt or depressed. Although kudos to Pine or the director for the visual motif of Toby constantly hanging his head down as though literally beaten down by Fate. Only at the very end do we see him standing proud. There are some plot holes, and some awkward and superfluous scenes (did we really need to see Tanner bonking a hotel receptionist?) that mar what's otherwise a lean and efficient film. Part of the blame for that, aside from the script, might be due to the director being a Brit. This kind of gritty, regional story is hard for outsiders to get right when it comes to the details, and Mackenzie is sometimes tone deaf when it comes handling his Texan characters. On the plus side, you can count on Jeff Bridges getting an Oscar nom for best supporting actor.
Posted by Cary Watson at 9:59 PM

The film review is so tempting I feel like seeing the movie. During my custom dissertation writing service about inheritance I came up with such a plot where children indulge in illegal things to pay off parent debts. Thank you it was a good post.