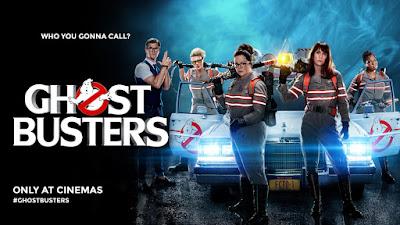 First the good news: Ghostbusters is funny. Not as funny as the original, but miles better than Ghostbusters II, a film almost no one cares to remember. What's made this film relatively unsuccessful (it's still grossed over $200m) is that while it succeeds as comedy, it fails as a film. The original version was funny and atmospheric, mildly spooky, exciting, and visually clever. The new one has none of those qualities. The ghosts were a major star of the first film, but in this iteration the spectres are like props tossed on stage for a group of improv comedians to riff on. That's OK to a point, but eventually you have to try and tell a story, develop an atmosphere, or create a sense of crisis or tension.

The fault lies with Paul Feig, the director. I saw Spy, his previous effort, and was astonished at what an incompetent director he is. He doesn't know where to put the camera, and many scenes feel utterly slapdash, as though he'd gone into the editing room and selected the worst takes on offer. He'd be fine directing a sitcom, but when it comes to features he's out of his depth. Another reason for the film's modest returns is that SFX ain't what they used to be, or rather, our enjoyment of them has changed. When the first Ghostbusters came out in 1984 the effects were ooh and aah-worthy. Audiences were only seven years removed from the SFX revolution that was Star Wars, and were eager for more of the same. By today's standards the '84 film looks a bit primitive, but at the time it was impressive. These days audiences don't view effects as anything special. Even middling budget films have great effects, so you can't expect to entice people with the prospect of seeing CGI ghosts. And the creative minds behind the CGI in this film definitely haven't done anything special. There isn't a single memorable entity, and the climax, featuring an unholy version of the Macy's Thanksgiving Day parade is annoying because it could have been brilliant if they'd used the actual balloon characters from the parade.

And now for the Leslie Jones portion of my review. When it came out that Jones, who is black, was playing the one Ghostbuster who is self-described as not knowing about "this science stuff," the social media reaction was swift and merciless--once again, critics said, Hollywood racism dictates that blacks can't be thinkers. They can provide the muscle or "street smarts," but it's the whites who do the heavy intellectual lifting. The critics were right. Casting Jones as the single non-academic Ghostbuster is liberal racism at it's worst. In interviews defending this casting decision, the filmmakers sound pleased with themselves just to have given a black woman a major role, but the lazy racism becomes apparent when you realize that Melissa McCarthy, who's made a living out of playing women who don't know much about "stuff," has been promoted to the holder of a post-graduate degree. Apparently if there's a black woman in the cast McCarthy has to get an educational upgrade. But the casting decision that annoys me almost as much is that Julia Louis-Dreyfus isn't in the cast. How can you do an all-female Ghostbusters reboot without using America's funniest female actor? Oh well, perhaps they can squeeze her into the sequel to replace Jones' character, who'll be off attending night classes to get her university degree.
Posted by Cary Watson at 12:28 PM

I'm looking forward to seeing it for myself. With those talented actresses, it should be a treat.