Book Review: The Fall of the House of Cabal (2016) by Jonathan L. Howard 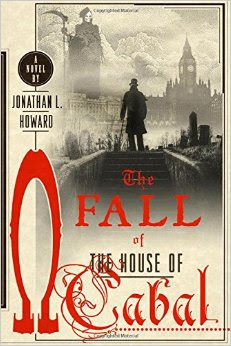 Let's play sports analogies: In the field of fantasy/horror fiction, Jonathan L. Howard is a decathlete who regularly ends up on the podium. He's a 20-game winning pitcher who can paint the corners with the fastball, freeze batters with his curveball, and make them look foolish with the breaking ball. He's a centre in hockey who plays a 200-foot game and can be counted on for some Gordie Howe hat tricks every season. And now I've run out of sports I know anything about. My point, and I do have one, is that Howard is a writer who, within his particular field, is adept at any literary style you care to think of. Depending on what's called for, or as the mood takes him, he can do comedy (high and low), horror, big action set-pieces, mystery, wit, spookiness, and good old-fashioned ripping yarn adventure. His masterful skill as a literary shape-shifter is always most evident in his Cabal books, of which this is the fifth in the series.

This time out Johannes and his brother Horst are on the hunt for the Fountain of Youth. To get there they require the assistance of three women: a spider demon, a witch, and a detective. The Cabal novels take place in a steampunky Europe that looks and sounds roughly like the 1920s. Cabal & Co. journey to several supernatural realms, fight everything from ghouls to vampiric bankers to Satan himself, and it's all done with style and effervescent inventiveness. That description might make it sound like the author has overegged his pudding (a common fault in the steampunk genre), but Howard is disciplined enough to never introduce a new story element without giving it the proper level of development and creative attention.

What might be most striking about this latest entry in the Cabal franchise is that it still holds the reader's attention. The woods are full of fantasy writers who crank out trilogies, quartets, and quintets, but it's rare for any of these shelf-fillers to maintain a high standard beyond the first in the series. The Cabal books are consistently excellent. One reason for this is that Howard dabbles in a different type of story with each outing. The series has included a mystery story, a picaresque adventure set in a carnival, a Lovecraftian epic, and a war story of sorts. The other factor that accounts for the longevity of the series is that Howard brought in Horst to be a foil for Johannes. Horst is a vampire with a heart of gold, and his geniality, humour and humanity act to leaven the sardonic misanthropy of Johannes.

You don't have to be a fantasy/horror fan to enjoy this series. Howard's main aim is to amuse, and what stands out most strongly about the Cabal books is their wit. There are lots of things that go bump, slither, and bite in the night, but the overall tone is comic with a generous side order of rip-roaring adventure. The humour is often acidic, the writing sometimes donnish and orotund (I sense the ghost of mystery writer Michael Innes is present here), and there is absolutely never a dull moment. And here's hoping Horst Cabal gets a standalone novel in the Cabal universe.
Posted by Cary Watson at 6:42 PM

one of the many things i love in this world is a good book to read and forget about everything else, a really good one usually lifts you up and takes you its own dimension.

the review suggest me that the book is going to be amazing. this is exactly what i wanted to read these winters, that being something thrilling , mysterious and spooky