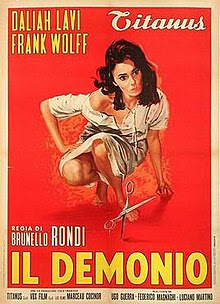 In terms of critical comment and background information, the online footprint of this film is very meager, and what little there is misidentifies it, IMHO, as a horror film. Despite the title and some of the plot elements, this is primarily a neo-realist film of psychological horror that's underpinned by a forensic look at the religious/folk superstitions and poverty of deepest, darkest southern Italy. In other words, it has more in common with The Bicycle Thieves than The Exorcist. And on another level the film looks at the fate of women who are outsiders within their communities, a common theme in Italian cinema of that era.

The central character is Purificata (Purif, for short), a startlingly beautiful peasant girl. In the opening scene she's making a love potion with her own blood and a lock of her hair. It's clear she's disturbed, and in the next sequence she stalks a man, Antonio, across the barren landscape of the Basilicata region as he goes to visit his future wife and mother-in-law. After this visit Purif waylays him and tricks him into drinking her potion. At this point we've guessed, rather than been told, that Purif and Antonio were once lovers, but he's rejected her in favour of the dowry and respectability of his dowdy bride-to-be. Antonio literally tosses Purif aside after she reveals that he's drunk her potion. From that point on Purif descends further into madness, resorting to folk curses against Antonio and continuing to follow him. She begins to have visions and hear voices, and soon the villagers think she's a witch or possessed by a demon. A priest attempts an exorcism, made riveting because of the understated way it's presented, and, as a bonus, it also introduces a very specific horror movie trope which lasts to this day. As Purif becomes more of an outcast, it opens her up to outright abuse; she's raped by a shepherd and the local shaman/folk healer, and is chased out of the area by a mob. She finds shelter in a nunnery, but by that point she's past helping and soon returns to her village to meet her inevitable and tragic fate.

Il Demonio smartly contrasts the beliefs of the villagers and peasants with the "madness" of Purif. As unbalanced as she is, the beliefs and actions of the locals, as shown in their religious ceremonies and folk customs, are equally insane to an outside eye. The main difference between the two, it could be argued, is that one madness is communal while the other is singular. And there's the rub: Purif suffers because her personal madness isn't in sync with the general madness. The title of the film seems to refer to Purif, but it can just as well be applied to those around her.

Purif is presented as an outsider from the beginning by virtue of her looks and because, we can infer, of her relative sexual freedom. This makes her both an object of fear and desire to men. The first scene in the film shows Purif playing with a pair of scissors before she cuts her hair to make the love potion that she believes will put Antonio under her control. The allusion to the idea of the castrating female who dominates men couldn't be more obvious. Men are, of course, willing to use her body when the opportunity arises in secret, but are also eager to form up into a mob to chase her away. This hypocrisy is highlighted at the very end of the film when Antonio has sex with Purif shortly after leading a symbolic witch-burning procession through town. Antonio's, and by extension the town's, terror of Purif's independence and flaunting of traditions comes to an end when he knifes her to death after one final use of her body.

Daliah Lavi plays Purif, and if she's remembered at all it's as eye candy in a few spy movies of the 60s. That's a shame, because this is an amazing, brutal, full-bodied performance that should have led her to much better parts. The film's success is largely thanks to her. There are only a handful of professional actors in the film, the rest of the cast being made up of locals, most of whom look as weathered as their land and are all at least a foot shorter than the pros. The other star is the cinematography. The Basilicata region is almost lunar in its starkness, and some of the shots of it are absolutely breathtaking. One of the locations used was Mantera, now a UNESCO World Heritage Site and in 2019 the European Capital of Culture, but in '63 it was still mired in medieval poverty. It says something about the quality of this film that it makes better visual use of Mantera than No Time to Die did more than fifty years later. The director/writer was Brunello Rondi, who didn't have a glorious career as a director but did co-write the scripts for some of Federico Fellini's most famous films.