Add Antonio Pietrangeli's name to the long list of Italian directors of the 1950s and 60s who should be a lot more famous. In a career cut short by his accidental death in 1969, he made only ten films, three of which could be considered classics of Italian cinema. Like so many of his peers, Pietrangeli was fascinated with the swift and shocking changes taking place in Italy during this era. The economy was red hot and creating a vibrant consumer culture, the influence of the Church was on the wane, and women were no longer tied inextricably to hearth, home or, most strikingly, to one man.

Pietrangeli's focus was on the changing role of women in this new Italy, caught between traditional Italian sexism and the more liberal attitudes that were sweeping the western world. In three of his best films, the female characters (women were almost always the protagonists in his films) find themselves adrift in a changed Italy, uninterested in traditional roles, but at the same time unable to find a secure foothold in a society with one foot in the traditional past and one in the liberal present.

In Adua and her Friends (1960), four prostitutes are left with an uncertain future after a new national law bans brothels. Adua (Simone Signoret), and three of her former co-workers open a restaurant in a rundown house in the country. Their plan is to serve food downstairs and turn tricks upstairs (this was actually what some prostitutes turned to). Instead of the restaurant serving as cover for their sex work, it immediately becomes a success on its own and the women don't have to work upstairs. Their respite from serving men in bed is only temporary. Two of them are betrayed or abandoned by their new boyfriends because of their former careers, and their landlord extorts them once he realizes how successful they are. They film ends with Adua now a lowly street prostitute being rejected by clients because she's too old.

The Girl from Parma (1963) is about Dora, an orphaned young woman who's been raised by an elderly 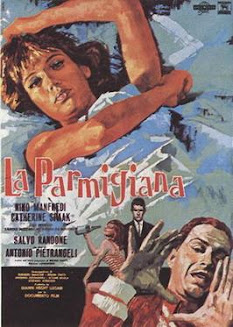 female relative. Although she maintains a prim facade in her small hometown, Dora wants to see the wider world, especially the men in it. She has a brief affair with a seminarian and then leaves for the bright lights of Parma to live with her aunt. She soon becomes the object of desire for a succession of men, none of whom she really has any deep affection for. Dora finally ends up in Rome with Nino, a feckless and luckless commercial photographer who has big ideas but small skills. In many ways he's Dora's male equivalent, and she's the only guy she really seems to like. She finally agrees to marry a straitlaced policeman who's both frightened by and drawn to her easygoing sexuality, but dumps him with carefree abandon. She looks up Nino again, but he's surrendered to middle-class respectability by partnering with a woman who owns a small cafeteria. Dora leaves Nino with a look of contempt, sits down at an outdoor cafe, and with a smile on her face looks forward to her next adventure. Roll credits.

Two years later, Pietrangeli made I Knew Her Well (1965), which stands as a darker take on the themes in The Girl from Parma, which is mostly a comedy. Once again, his subject is a rootless young woman who's fled a dull life in the sticks. The woman is Adriana and she dreams of a career as an actress. In today's terms she'd probably be trying to become an Instagram or YouTube personality. She has no real talent, just a burning desire to not be a nobody. A brief glimpse of her childhood home, a shack in the middle of a dusty plain, tells us why she's set out on her chosen path. Adriana bounces around the lower depths of Rome's entertainment industry, getting small acting jobs, but making most of her money as an escort. Unlike Adriana, she isn't content to go with the flow, and when she recognizes that the future holds nothing better for her, she kills herself. 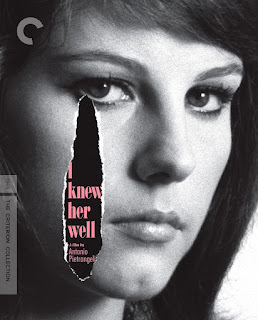 In all three of these films the female protagonists are adrift in a rapidly evolving society that seemingly offers new opportunities for women, but is still riddled with patriarchal and sexist attitudes. In Adua, as soon as the women are making real money from labour that's traditionally been done for free in the home, men move in to exploit them. They can sell their bodies, but not their cooking. In the other two films, the protagonists are only valued as eye candy and sex objects. In Girl Dora adapts to this situation and rides the wave, as it were. She has no goal in life, and seems to find her aimlessness pleasurable. Adriana, on the other hand, has her spirit eroded away by the many reverses she suffers, all of them coming from a male-dominated industry that treats her as a product.

In Pietrangeli's films, women are the main victims and beneficiaries of Italy's new economic and social order. They're given a taste of new freedoms, but almost all of these opportunities are booby-trapped by men. And the women don't quite know how to navigate this new terrain. It's interesting that the women in Adua, all of whom have lived outside the mainstream their entire adult lives, are fully realized characters. Dora and Adriana's inner lives are largely mysteries to us, which seems like a reflection of the mystery they have to face in finding a place for themselves in Italy. The male characters are unsympathetic to a man. The best of them can be charming, but inevitably they turn out to be craven, weak, hypocrites, or fools. The worst are exploiters and predators.