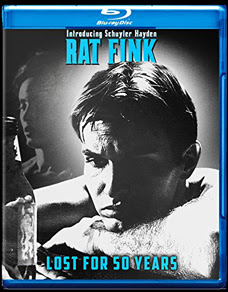 The title of this film does it no favours. The first thing some people will think of are the customized hot rods that go by that name. Everyone else will probably go...huh? It's also known by the title My Soul Runs Naked, which sounds like a volume of Beat poetry, but at least it's more apropos to the plot of the film. What we actually have here is a noir study of a pop star's rise and fall, done with b-movie brutality and urgency.

The rat fink in question is Lonnie Price, a handsome, but psychopathic, young drifter who becomes an overnight sensation as a singer. We meet him as he hops off a freight train in Los Angeles and escapes from some railway cops, but loses the guitar he was carrying. He finds shelter with a lonely older woman, sleeps with her, and then takes off the next morning after emptying her purse. Lonnie wanders around and comes across a concert venue where a hot new star named Tommy Loomis is playing. Lonnie watches Tommy perform and is instantly jealous and envious at the sight of female fans swooning over him. Later that night, Tommy leaves the concert and suffers a fiery "accident" engineered by Lonnie. A few days later, Lonnie shows up at Tommy's manager's office and wows him with an audition. In no time flat Lonnie is living the decadent pop star lifestyle of the early '60s: whiskey! surfer dude entourage! Thunderbird convertible! His descent is just as swift, marked by boozing, statutory rape, rape, a murder, and ending with a fatal collision.

The writer/director is James Landis, who also did The Sadist (my review here) two years before, a brilliant micro-budget thriller that's as cold-blooded as they come. Landis brings the same bleakness and nastiness to Rat Fink.  Lonnie is a psychopath before he becomes a star, due to, the film argues, a stern and unloving father who has no regard for his son even after he becomes a success. This dose of pop psychology isn't used to soften our view of Lonnie. He's a thorough bastard, and the film is unflinching (for its time) when it comes to handling scenes of sexual abuse and abortion. If the film has a point of view, it's that stardom doesn't turn people into monsters, stardom attracts monsters. Like many b-movies Rat Fink has a plot that's a bit too jerky, acting that's this close to being professional, and some regrettable dialogue, but it's dark, vicious tone is shockingly at odds with the way pop stars were presented at the time. It wasn't until That'll Be the Day and it's sequel Stardust came along in 1973/74 that there was a similarly grim take on pop stars. Another exceptional element in Rat Fink is the cinematography, courtesy of Vilmos Zsigmond who also shot The Sadist. B-movies aren't supposed to look this good, and the film owes much of its success to his artistry.