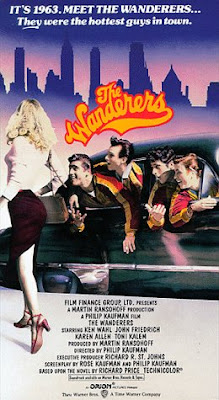 Released in 1979, The Wanderers has always flown under the radar. When it came out it represented one of the last gasps of the mini-craze for looking back at the Eisenhower/Kennedy era through jukebox-tinted glasses that began with American Graffiti in 1973. This nostalgic sub-genre, which was, as far as I know, a peculiarly American obsession, bathed the fairly recent past in a rosy glow of bulbous cars, greased-back hair, torpedo bras, and lots and lots of doo wop music. TV's Happy Days was the most egregious example of the genre, with The Wanderers being the best.

Philip Kaufman was the co-writer and director, and his body of work, which includes The Right Stuff, The Great Northfield Minnesota Raid, and The Unbearable Lightness of Being, was adept at showing men living the macho dream. The Wanderers of the title are a gang of Italian-American teenagers growing up in NYC in 1963, led by Richie, played by Ken Wahl. The Wanderers' world centres around their high school and neighborhood, which Kaufman fills with a constellation of rival gangs including the Baldies (all hairless, of course), the Wongs (Asian, all with the last name Wong) and the all-Black Del Bombers. There's really no male under the age of 20 who isn't in a colorfully-named, ethnically-defined gang. The boys spend their time taunting or fighting rivals, busting each others balls, drinking, and, of course, lusting after women. The plot is anecdotal, the only through line being Richie's relationships with two women, one his long-time girlfriend, the other from the wrong side of the tracks, in this case meaning a Greenwich Village proto-hippie played by Karen Allen. Secondary plot threads follow Joey, Perry and Turkey, fellow Wanderers who, by necessity, see the gang as a surrogate family.

What sets The Wanderers apart is how Kaufman subverts the macho posturing and bravado that the gangs are all about. The Wanderers see themselves as fiercely independent knights of the mean streets, they even take their name from the song by Dion that's an anthem about freedom and independence, but the reality is that they're being exploited, deceived, abused, or controlled by their elders. By the end of the film the Baldies have been tricked into joining the Marines, Joey and Perry flee to California to escape turbulent homes, and Richie is forced into marriage after getting his girlfriend pregnant, which also means he'll have to work for his mobster father-in-law. Even the football game which forms the finale of the film, a sporting challenge between the Wanderers and the Del Bombers, takes place thanks to the patronage of Black and Italian gangsters who see it as a chance for gambling action.

And this brings us to the most audacious and brilliant element in the film: the Ducky Boys. Yes, there's another gang in the story, but this one is presented as quasi-supernatural or mythic. They favour chinos, never speak, and hang around some outer darkness beyond the Wanderers' turf, a place that's always bathed in mist and steam. There's something vampiric about them, and all the other gangs are terrified of the Ducky Boys. They appear at the football game in their hundreds in the same way the crows assembled in Hitchcock's The Birds. The Ducky Boys attack the Wanderers and Del Bombers but are beaten back thanks to all the local gangs uniting against them. The Ducky Boys are more symbol than gang, but of what? A manifestation of the fear and ignorance the local boys have of the larger, more complex world outside their neighborhood? Or perhaps they represent the WASPy elites who control that larger world. Either way, the film's enthusiastic left turn into spooky surrealism is a masterstroke, visually and symbolically.

The only real flaw in the film is Karen Allen's character, Nina. Like the Ducky Boys, she's more symbol than living, breathing person. She's that sliding doors moment in Richie's life when he's offered an alternative to a circumscribed life with his gang and girlfriend. Her "meet cute" with Richie is awkward, and her immediate interest in him serves the plot, but not reality. Even worse, at the end of the film Richie catches a glimpse of Nina and follows her to a club in Greenwich Village where...wait for it...Bob Dylan is singing "The Times They Are A'Changin'." The scene is so on the nose it leaves a bruise. Aside from that, and some secondary characters who chew the scenery, The Wanderers stands as the best film of its genre because it imaginatively and critically dissects, rather than embalms, an era that gets more love than it should.