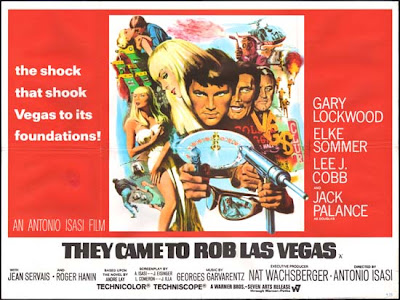 In the 1960s, as the Hollywood studio system was falling apart at the creative and financial seams, European cinema was kicking ass with auteurs like Fellini, Truffaut, Godard, and Antonioni. Europe was also doing a roaring business in what would later become cult pictures: titles such as Barbarella, Danger: Diabolik, The 10th Victim, and Black Sunday all became classics of their kind. It's into this last category that They Came To Rob Las Vegas falls. Like most cult films, it's essentially a B-movie that earns the cult label through an extra degree of artistry, inventiveness, energy, and, for lack of better term, craziness.

The plot, which is far more complex than your average B-movie, has a group of thieves taking down an armoured car that ferries cash from Las Vegas to Los Angeles. But this is no ordinary armoured car; it's a Skorsky armoured car, which means it's built to be invulnerable to attack. It even has remote controlled machine guns to dissuade attackers. Tony, the leader of the gang, has the edge on Skorsky because his girlfriend, Ann, is Mr Skorsky's personal (very) assistant, and can tell him the route the car is taking. The attack on the armoured car goes down without a hitch, but things quickly go pear-shaped from there, and Tony, the anti-hero of the film, has to scramble to keep the money and his life.

That's the plot in a very tiny nutshell. But what makes the film a cult classic? Let's start with the soundtrack. It was almost a regulation that all European genre films of the '60s had to have a really cool/weird musical score, and They scores high in this department. Georges Garvarentz was the composer, and when he wasn't scoring schlock like Killer Force and Sappho, he wrote the music for Charles Aznavour's songs. Georges gives the film some wonderfully brassy, bombastic music for the action scenes, and a classic piece of trippy mood music that features a female vocalist doing a lot of humming and la la la-ing.

The quality of the acting is all over the place. Pros like Lee J. Cobb and Jack Palance earn their paycheques, but no more, and Elke Sommer as Ann is, well, she looks good in a low-cut dress. It's Gary Lockwood as Tony who's the revelation here. Stanley Kubrick had already cast him as the doomed astronaut in 2001: A Space Odyssey, and you can see here why Kubrick gave him the role. Lockwood lacks leading man looks, but he certainly has leading man charisma. His character is supposed to be tough, smart and oh-so-very-cool, and Lockwood conveys all this effortlessly. It's a bewilderment that Lockwood never got anything but TV work after this and 2001. The no-name actors who make up the rest of Tony's gang all seem to have got their training in the commedia dell'arte. Nothing is too over the top for this group of thespians. The script infers that they're all hippies, but they come across as deranged hipsters with a fondness for trilby hats.

What really makes this film work is the look of it. European directors of this period loved the chance to work with big, wide-open spaces. Sergio Leone being the most obvious example. In this case the director, Antonio Isasi, is shooting in Las Vegas, California and the Spanish desert (doubling for Nevada), and he clearly relishes the chance to move men and machines around in vast landscapes. The shot composition is always first rate, as is some of the location work in Los Angeles and San Francisco. The highlight of the film is the seizure of the armoured car in the desert. It's a complicated sequence involving many moving parts and it is, without a doubt, a brilliant combination of cinematography and editing. It's during this sequence that something becomes very apparent about the film's visuals. Except for a few shots involving moving vehicles, the camera never moves in this film--no zooms, pans, tilts, and no tracking or dolly shots. Normally that would produce a film that looks inert, but in this case almost every shot ends with a cut on some kind of action, which is picked up, perfectly synced, in the next shot. Some razor-sharp editing ties it all together to produce a visually dynamic film in which the camera is almost always locked down. If I was teaching in film school this film would be on the syllabus.

Another thing that distinguishes this film is its absolute cold-bloodedness. Tony is clearly the hero of the film and yet he thinks nothing of killing security guards and, in one case, an innocent bystander. This kind of nihilist attitude is common in films now, but in 1968 it was pretty shocking.

Is They Came To Rob Las Vegas a great film? No, of course not. The acting is sometimes laughable, the dialogue is clunky, and some sequences (the Las Vegas strip by night) appear to have been filmed from the back seat of a cab. What this film does have is insolence, energy, a surprisingly intricate plot, good action sequences, and a fun vulgarity that makes it not just a B-movie, but a cult B-movie. If you want it, you'll have to order it online from the Warner Archive Collection.
Posted by Cary Watson at 12:10 AM