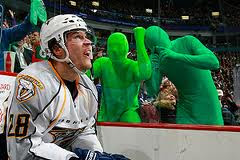 If you have an underperforming and/or overpaid player in the NHL you can trade him, bury his contract in the AHL, or even buy him out. I only wish CBC would do the same with some of HNIC's on-air talent.

Let's see; how about sending Glenn "Hyperbole" Healy down to a house league somewhere in the Yukon where he can constantly tell kids they're about to play the most important game/period/shift of their lives; Don Cherry could be traded, straight up, for Donald Trump; and Ron MacLean could be bought out and sent to open a referee school in Khandahar.

The problem with all three of these personalities is that thanks to being given jobs on Canada's premier hockey program, they have all developed a level of self-importance that beggars belief. This was most recently seen with Healy's tirade against the Green Men of Vancouver, who, he claims, detract from the game. Outside of Osama Bin Laden hunting, hockey is the nastiest, ugliest, most violent team sport in the world. Does Healy really think two men cavorting in green unitards can tarnish the game? But then, Healy is speaking from the HNIC pulpit where hockey is viewed as a quasi-religion.

Don Cherry has simply gone past his sell-by date. It used to be that he couldn't pronounce European names, now he can't handle good ol' Canadian names like Kevin Bieksa. Aside from that problem, his bigotry remains undiminished (he only makes loving mention of the hometowns of Anglo-Canadians), and his praise of players who don't wear visors is akin to urging parents to forgo baby seats for their infants.

The worst of the lot is Ron MacLean, the perpetually smirking adolescent of Canadian sports broadcasting. Ron's tortured, witless puns now seem to have become the manifestation of his outsize ego: "I said it, so it must be funny!" His self-importance becomes glaringly obvious whenever someone other than Don Cherry disagrees with him. Recently, Mike Milbury took a more pacifist stance than MacLean thought desirable and a whining Ron practically choked on his own bile. And on the rare occasions MacLean interviews Gary Bettman, his disdain for the commissioner could only be more obvious if he bit him.

So here's a plan to revamp the HNIC team, much as hockey teams do in the off-season: bring Elliot Friedman up from the minors and give him MacLean's job; poach Pierre Maguire from TSN and cut loose Healy; and send Cherry to the old goons retirement home and just do away with Coach's Corner. Finally, here's a really revolutionary idea for HNIC: hire a European colour commentator. A Russian one, preferably. Europeans have been a major force in the NHL for nearly 40 years so it would seem that they're overdue for one of the commentating jobs currently monopolized by ex-enforcers, ex-backup goalies, and ex-coaches.

I know, get Alexei Kovalev to replace Don Cherry and call the segment Commissar's Corner. At least Kovalev's actually won a Stanley Cup.
Posted by Cary Watson at 3:29 PM