Book Review: The Shadow of the Wind by Carlos Ruiz Zafon 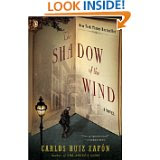 The key element in a gothic novel is the Terrible Secret. The TS must be so awful it will destroy careers, honour, loves, even lives if revealed. The action in a gothic novel therefore revolves around the hero or heroine attempting to uncover the TS, and another individual (not always a villain) trying to keep the TS a secret. Jane Eyre was one of the first in the genre, and The Shadow of the Wind, set in post-WW II Spain, attempts to resurrect it. I'll give Zafon full marks for trying.

The story clips along at a good pace, it's very well-written, and the characterization is more than competent. What's not to like then? Well, the problem is that there's always something fairly ridiculous about gothic novels, specifically, the terribleness of the TS. In this case the TS scores fairly high on the awful-o-meter, but, at the end of the day, the TS seems improbably unfortunate rather than terrible. It's also possible to see the TS and its consequences as a metaphor for the Spanish Civil War, but that's a subject that would only resonate with Spanish readers.

There are two other problems with the novel. The first is that our hero, Daniel, has to unravel a great many personal histories in order to learn the truth of the TS, and, while this journey is usually entertaining, after a while I found I was getting impatient. Also, it's not a wise idea to hand the story over to a different narrator in the final fifth of the story. The second problem is that the action of the novel is precipitated by a trip to the Cemetery of Forgotten Books in a spooky, labyrinthine building in Barcelona. Now, that sounds cool, but it belongs more in a fantasy novel than a gothic novel, and it starts the novel off with the wrong tone.

I was mostly entertained by Shadow, but in the end it wore out its welcome.
Posted by Cary Watson at 5:10 PM

Email ThisBlogThis!Share to TwitterShare to FacebookShare to Pinterest
Labels: Carlos Ruiz Zafon, gothic novel, Spain, The Shadow of the Wind