Book Review: A Walk In the Dark by Gianrico Carofiglio 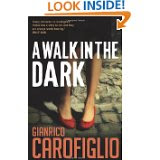 Gianrico Carofiglio's books are described on the jackets as mysteries, but in reality they're legal thrillers, with a side dish of psychological insight into the character of Avvocato Guido Guerrieri, the hero of Carofiglio's novels. Fortunately, Guerrieri is an engaging character; well-read, a film buff, a fan of American rock 'n roll, and reluctantly committed to doing the right thing in his legal career.

In A Walk In the Dark, Guerrieri is representing a young woman who is charging her ex-boyfriend with assault, and therein lies the appeal of Carofiglio's books; he doesn't give Guerrieri sensational or improbable cases. Carofiglio shows us how much drama can come out of pedestrian criminal cases. His previous novel, Involuntary Witness, was about a child murder, but it didn't offer any sensationalism, just the patient defence of a man accused of a crime he didn't commit. This most recent novel has a thrillerish conclusion, but still earns most of its appeal from Guerrieri's clever undoing of his client's attacker. The main weaknesses of the novel are Guerrieri's improbable, but fleeting, relationship with nun named Claudia, and the ending, which is largely predictable.
Posted by Cary Watson at 4:56 PM

Email ThisBlogThis!Share to TwitterShare to FacebookShare to Pinterest
Labels: A Walk In the Dark, Gianrico Carofiglio, Involuntary Witness