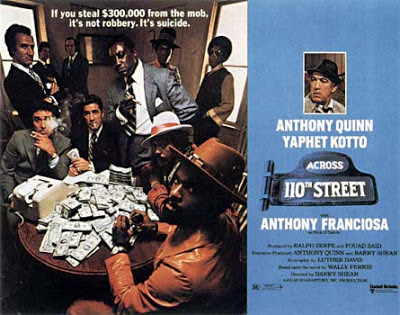 I've written about what I call "cop noir" in a previous post on The Seven-Ups, but it's worth repeating in the context of this film: Cop noir begins with The French Connection (1971). If film noir was all about doomed lovers, laconic private detectives, and moody cinematography, cop noir was about documenting the decline and fall of American cities and the institutions that make them function as seen through cop eyes. Cop noir looks raw, sounds raw, and shows big American cities torn apart by street crime, organized crime, drug addiction, poverty, and corruption. Hard on the heels of The French Connection came Dirty Harry, Across 110th Street, Busting, Serpico, The Taking of Pelham 123, Badge 373, The Seven-Ups and a number of similar films.

Across 110th Street is one of the highlights of the genre. All cop noir films are aggressive in showing just how rotten their urban environments are, but this film does it with real ferocity. One way it does this is by showing the racial fear and hatred that was one of the causes of the decline of American cities in the 1970s. The film begins with three black robbers knocking over a cash counting house run by the Mafia and a black Harlem gangster. They make off with 300k after killing five mobsters and two cops, and within hours the Mafia and the Harlem hoods have joined forces to track down the culprits. They join forces despite the fact that they can't stand each other. Nick, the Mafia lieutenant given the task of finding the thieves, gleefully uses the N-word every chance he gets, and Doc, the Harlem boss, happily responds in kind. The detectives in charge of the case (played by Yaphet Kotto and Anthony Quinn) are almost equally at odds because of race. All in all, this had to be an exceedingly uncomfortable film for both black and white audiences to sit through.

Across also gets marks for being non-judgmental about its villains. The three thieves are shown to be acting out of desperation and fear, and the leader of the gang, Jim, gets a compelling speech in which he describes just what's led him to taking such an enormous risk. Paul Benjamin plays Jim, and it's a wonder his performance didn't lead to bigger and better roles. Not surprisingly, it was Sidney Lumet, a director with an amazing ability to spot new talent, who gave him one of his first roles in The Anderson Tapes (1971). All the cast performs well, and even Anthony Quinn manages to tone down his hamminess a wee bit. The look of the film is another of its strengths; it's almost entirely shot with handheld cameras, and the slums and cop shops most of the action takes place in are so gritty you may need to wipe down your TV screen after viewing. The documentary look in cop noir was pioneered in The French Connection, but Across takes it to the next level.

Cop noir took a dystopian view of American society, and it's a perspective that didn't last out the decade. Through the '80s and '90s cops became one-dimensional superheroes played by Mel Gibson, Arnold Schwarzenegger, Clint Eastwood, Bruce Willis and Eddie Murphy. These cops were wisecracking killers, and their enemies were cartoon villains or demonized proles interfering with the safe running of the American Dream. The cops in cop noir movies are sometimes corrupt, and when they solve a case it usually produces a lot of collateral damage, both physical and emotional. This harsh view of American life reflected the reality of the nation's cities, but, as it turned out, the public had a limited appetite for it. In the last decade TV shows like The Wire have partially resurrected cop noir, so here's hoping we get a film revival of the genre sometime soon. Are you listening, Quentin Tarantino?
Posted by Cary Watson at 7:13 PM