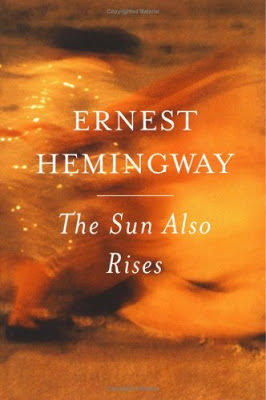 No matter how much you read or how varied your taste in literature, there are bound to be yawning gaps in your literary CV; there are just too many great books and authors for one lifetime. One of the gaps in my reading history is, was, Hemingway. I dipped my toe into his novels once or twice a long time ago, but never stuck around long enough to see how the water was. And now I have. I can't say it was worth the wait.

The Sun Also Rises has not aged well. In 1926 it represented the cutting edge in modern literature with a prose style that was as crisp and declarative as a telegram or newspaper. The circumlocutions and metaphorical excesses of Victorian fiction have been cast aside and what we're left with is a novel that sometimes feel like it's being told in morse code. This is all well and good, a breath of fresh air and all that, but this doesn't get around its main weakness as a novel. One of the hallmarks of pre-WW I literature is that its characters are usually full of ambition or purpose, or, lacking those two qualities, are strongly wedded to, or trapped by, moral and social codes of behavior that dictate their course through life. Hemingway's characters, as he says off the top, are part of a "lost generation," people who are no longer anchored to institutions, beliefs or codes of conduct. Even the plot reflects this idea; the story rambles from Paris to Spain following its small cast of characters as they drink, bicker, have affairs, and soak up the sights. This aspect of The Sun Also Rises makes it feel very modern, but for me Jake Barnes, Cohn, Lady Brett and the other major characters seem more like symbols than flesh and blood people. Their dialogue is so stilted and spiky the impression we're left with is of people playing roles, or of an author who's uncertain of how to create a fully realized character.

One odd aspect of this novel is that it sometimes feels like an excellent travel book marred by outbreaks of fiction. Hemingway loved travel, and that's what shines through most strongly in his writing. His prose style is spare, to say the least, but with a minimum of fuss he manages to capture the appeal of living abroad and being exposed to new sights, sounds and sensations. The best example of this is a section of the novel that describes a fishing trip in rural Spain. A ruthless editor might have excised it as superfluous, but as an aside that describes the pleasures of travel and the outdoor life it can't be beat. I wonder if one reason for its initial and enduring success was that its picture of the hedonistic expatriate lifestyle had a powerful appeal to American readers who found their conservative, church-going society an uncomfortable fit.

Another damaging aspect of the novel is its anti-semitism. The character of Robert Cohn is Jewish, and all the other characters seem to have a visceral dislike of his Jewishness, even Jake, who is the central and most likable character. This anti-semitism isn't examined critically, it seems to be something Hemingway feels is natural and unremarkable. Finally, The Sun Also Rises seems to bear more than a passing resemblance to Antic Hay by Aldous Huxley, which I read earlier this year. Huxley's novel also had a lost generation theme, but takes place entirely in London. Huxley's style couldn't be more different from Hemingway's, but I'm betting Papa was influenced by Antic Hay. Both novels feature a small cast of characters, none of whom are presented realistically, drifting through life. My review of Antic Hay is here.
Posted by Cary Watson at 8:52 AM