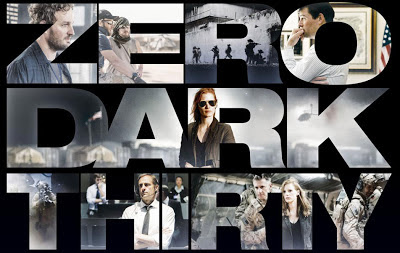 If nothing else, Zero Dark Thirty confirms that director Kathyrn Bigelow is the Leni Riefenstahl of the American right. Let's start with the torture question. The first half-hour or so of the film is filled with scenes of al-Qaeda suspects being abused by CIA agents: beatings, waterboarding, sleep deprivation, we see it all. As has been widely reported, and contrary to what's shown in the film, the hunt for Osama bin Laden wasn't helped in any way by the torture of suspects, and even Bigelow, in a letter to the Los Angeles Times answering the criticism aimed at her film, waffles in her own defense, falling back on her 1st Amendment rights "to create works of art." In other words, she's saying that it's OK to take the hard truth that torture didn't work and fictionalize it into a success story because, after all, it's just a movie. Some people would call that propaganda. I do.

So why did she distort the truth? One plausible explanation is that in cinematic terms showing scenes of torture is more dramatic, engaging and visually powerful than scene after scene of people reading transcripts and conducting briefings. The other possibility has a more political explanation and becomes apparent later in the film when two CIA agents are watching a TV interview with President Obama. In the interview, done shortly after his election, Obama announces that the U.S. will no longer use or condone torture. The agents don't react to this statement and barely pay attention to what Obama is saying. What this little scene suggests is that the CIA people in the field have no respect for Obama, and given that the early part of the film has argued that torture pays big intelligence dividends, the point of the scene becomes clearer: the film is arguing that Obama was, at best, out of touch with realities on the ground, and at worst was a hindrance in the hunt for bin Laden. But there's more. In the end phase of the hunt the decision to attack bin Laden's compound is portrayed as a decision made wholly the CIA. There's barely a hint of any presidential involvement. A quick check of the historical record shows that the pursuit of bin Laden was drastically scaled down by President Bush in 2005, who said "I don't know where bin Laden is. I have no idea and really don't care. It's not that important. It's not our priority." In 2008, President Obama prioritized finding and killing bin Laden, and in April 2011 it was he who gave the go-ahead for the raid on bin Laden's compound.

So it would seem that some degree of credit for the death of bin Laden should go to President Obama. Bigelow denies him this credit, and very clearly goes out of her way to make him seem like part of the problem, not part of the solution. In all the talk about the film's fallacious portrayal of torture as an effective means of intelligence gathering, little has been said about its anti-Obama political agenda. Now, I'm not American and I don't particularly like the president, so I don't, as they say, have a dog in this fight, but it seems obvious that Zero Dark Thirty attempts to downplay and disparage the Obama administration's part in the killing of bin Laden. But why should she do this? One intriguing explanation is that the high degree of official and unofficial help Bigelow got from the Pentagon and CIA came with a price: give us the glory and not that black guy none of us can stand. It's either that or Bigelow's a hardcore Republican.

Putting aside the film's function as a vehicle for disinformation, it's not as good as Bigelow's previous effort, The Hurt Locker. The chief problem is the main character, Maya, a young CIA case officer who makes it her single-minded goal in life to find bin Laden. The trouble with Maya is that she's nothing but a tightly wound ball of anger and determination. She's more of an investigation-bot than a human. Bigelow and her screenwriter are peddling the cliche that a successful woman can't express the normal range of human emotions. Maya's main co-worker, a man, is just as driven and ruthless but is given a more rounded personality. Jessica Chastain gives a good performance as Maya, but most of the time all that's required of her is that she look stern. And her abusiveness towards her superiors makes for some cheap dramatics, but in the real world it's the sort of behavior that gets people fired or reassigned.

Bigelow gets full marks for her recreation of the attack on bin Laden's compound. It generates a lot of tension, which is quite a feat since we know exactly how it's all going to play out. Bigelow shoots the action in a combination of night vision p.o.v. and near total darkness, and it's hard to imagine this sequence being done any better. As she showed in The Hurt Locker, Bigelow has filmmaking talent to burn, it's just unfortunate that it's been corrupted by a less than subtle propaganda message.

jessica chastain is outstanding. the film grows on you and i love the documentary feel to it. its a bold film to make. Katherine is a star director. commendable effort as in many places u feel as if u r a part of the project.