Book Review: Shadow of the Rock (2012) by Thomas Mogford 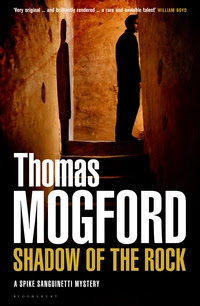 One of standup comedian Eddie Izzard's best pieces is about how the British Empire arose thanks to the "cunning use of flags." Most of  those flags have come unstuck from the four corners of the world, but if the Brits no longer acquire territory through the agile use of flags, their writers seem keen on claiming a literary empire through the cunning use of fictional detectives. British authors Michael Dibdin, Robert Wilson, John Burdett, Martin O'Brien, Colin Cotterill, Tarquin Hall, Barbara Nadel, Michael Pearce, Martin Walker and Nicholas Freeling have all made a good living writing about crime and detection in foreign climes. It's an odd phenomenon. As far as I know no European authors have set detective series in the U.K., and only a handful of American writers have tried it. So it would seem that the spirit of empire-building still lives on in the imaginations of British writers, and it can truly be said that the sun never sets on Britain's empire of fictional sleuths.

One of the newest empire-builders is Thomas Mogford, author of a series of mystery/thrillers featuring Spike Sanguinetti, a lawyer living in Gibraltar. The trick with writing a mystery novel for an audience that's unfamiliar with the locale and culture the story is built around is to avoid sounding like a Lonely Planet guidebook. Not every author manages this; in fact, some of the cozier mystery writers positively wallow in local colour. These aren't so much mysteries as they are porn for armchair travelers. Mogford avoids this trap. Shadow is set in Gibraltar and Morocco, and most of the local colour we see is dusty and dirty: no moonlit, romantic strolls in the Casbah. Mogford also does a good job of integrating background info and current events into his descriptions without sounding like a Wikipedia entry.

The plot has Spike investigating a murder charge against a childhood friend who's been accused of killing a woman in Tangiers. The investigation bounces between Gibraltar and Morocco, and involves a hi-tech energy firm, Bedouin tribesmen, and a variety of people who don't feature in ads for Moroccan tourism. Mogford writes with energy and efficiency, never slowing down for any of those and-here's-another-interesting-aspect-of-life-in-blank moments that other mystery writers working in this sub-genre often succumb to. The story is enjoyably twisty and nasty enough to deter readers who might think this is a cozy travelogue with a dollop of murder. My only complaint would be that Spike is a little too laconic. We can see that's he's good at what he does, but getting a fix on his personality is pretty difficult.
Posted by Cary Watson at 12:00 PM