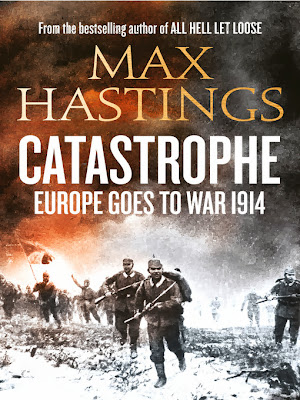 Max Hastings has carved out a reputation as one of the most insightful and readable historians of the Second World War. Catastrope is his first book on the First World War, and it has to count as a misstep. The problem is that his book is really two monographs loosely tied together by detailed accounts of the military actions on the western and eastern fronts in 1914.

Hastings' first monograph is on the subject of whether the outbreak of war was a kind of mathematical inevitability due to a combination of  inflexible treaties and mobilization schemes that couldn't be undone once they were set in motion. This has become a common view, largely thanks to Barbara Tuchman's book The Guns of August, and Hastings (he never mentions her book, but it's clear that's his target) takes a contradictory position. He asserts that Germany could have easily dissuaded Austria from invading Serbia, which was the first domino to fall in the march to world war. Hastings argues that Germany's febrile militarism and nationalism, at least among its ruling classes, provided the true impetus for the conflict. Of all the major European powers,  Hastings makes a strong case that Germany was the one with the greatest hunger for war.

Hastings second monograph deals with the argument that the war was a tragic farce because, unlike the Second World War, it was a conflict that was ridding the world of something evil; it accomplished nothing except the reshuffling of European borders and some colonies being passed back and forth like trading cards. Hastings takes the view that a victorious Germany would have been, well, not a nice thing. This monograph is the weakest of the two. Hastings is almost dealing in speculative fiction in deciding that the Kaiser's Germany would have been the Third Reich-lite. His only evidence for this is the harshness with which the Germans treated the civilian population in France and Belgium. The Germans were cruel, but it's hard to extrapolate much from that. It's possible the French and British might have been just as harsh had they been occupying German soil.

On the subject of the terrible human cost of the war, and the suffering of the troops in the front lines, Hastings has nothing new to say. Like a lot of other historians he simply shrugs and says that the state of military technology at the time made trench warfare inevitable. What Hastings doesn't address is the utter ruthlessness with which all the combatants tossed away their soldiers' lives. The best explanation for this behavior was provided by novelist Alan Sillitoe in Raw Material, his partly-fictionalized biography of his grandfather's experiences at war and as a worker. As the title suggests, Sillitoe argues that the slaughter of World War One was a direct result of the ruling classes viewing the working classes as nothing more than expendable raw material. The way troops were handled and treated by their leaders is eloquent proof of Sillitoe's argument. It's notable that during the Second World War Britain and America were very sensitive to the welfare of their soldiers. Memories of WW I and the advance of socialist parties and trade unions in the years between the wars had changed the prevailing view that the lower orders could be used as cannon fodder. Only the totalitarian states of Germany, Russia and Japan could dare to spend their soldiers' lives as recklessly in WW II as had been done by all the nations fighting in the previous world war.

Catastrophe is an enjoyable read, nicely seasoned with a variety of anecdotal material, but it really amounts to something that could have been presented in a much reduced form in a history journal.
Posted by Cary Watson at 2:31 PM