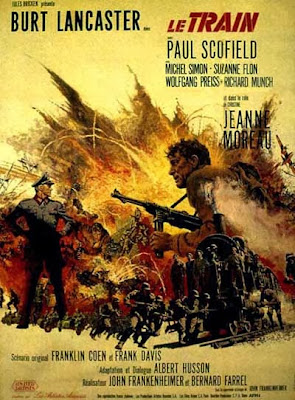 A few months ago director Spike Lee released his list of the 87 films he deems as "essential" viewing for students in his NYU film class. Like any list of this variety there were a few surprises (Kung Fu Hustle?), but it was mostly a pretty sober and conventional inventory of great films. One film that stuck out for me, one that rarely gets a mention on any kind of list, was John Frankenheimer's The Train. Lee has it right; The Train is an example of flawless filmmaking.

John Frankenheimer is the best director to never have been nominated for a Best Director Oscar. Despite making classics like Birdman of Alcatraz, The Manchurian Candidate and Seven Days in May, he never got a nod from the Academy. Frankenheimer was a master of directing stories about men butting heads with other men, which isn't to say he was strictly an action movie director. He was equally skilled at showing conflict that was based around ideology, as in Seven Days in May (1964), a political thriller that feels more contemporary with every passing year.

The Train features both action and ideas, and it combines the two brilliantly. Set in August of 1944, the story pits Labiche (Burt Lancaster), a French Resistance fighter, against Von Waldheim (Paul Scofield), a German officer attempting to ferry a trainload of invaluable artworks out of Paris to Germany just ahead of the advancing Allies. Using a combination of sabotage and subterfuge, Labiche delays and finally stops the train. However, each act of sabotage costs dearly in terms of lost lives--Resistance fighters are killed and civilians are shot as reprisals for attacks on the train.

The action elements are superb. Frankenheimer manages the neat trick of making the movement of trains as exciting as the best car chases, and since the film was made in the Jurassic era before CGI, the explosions and train crashes are the real deal and they're all spectacular. And of course any film with Burt Lancaster already has a head start in the action department. He did all his own stunts and did them with an effortless grace that made him the Baryshnikov of action. The real action star here is Frankenheimer. Practically every scene features crowds of extras, moving vehicles, trains, and this is in addition to the main actors going through their paces in the foreground. Frankenheimer's coordination of all these moving parts within scenes is amazing, and gives the film a kinetic energy that very few other films have ever matched.

This is also possibly the most noir war film ever made. The subject of the film is the theft of artistic masterpieces, but the look of the film is enthusiastically, and ironically, grimy. The paintings are glimpsed briefly at the beginning of the film, but after that we see nothing but the smoky, steamy, noisy world of life and work around railway yards. Everyone and everything seems to be permanently coated in coal dust and oil. Adding to the noir tone is the fatalistic attitude of Labiche and his fellow fighters. They perform heroic deeds, but they do it feeling that their efforts are doomed to failure. This is where The Train also becomes a film about conflicting philosophies. Labiche has no taste or interest in art; he's blue collar to the core and his character is as implacable and brutally efficient as the trains he operates. He's also cautious with the idea of risking lives to stop a train with a cargo he sees as having no value. Waldheim cares deeply about the art, despite the fact that it's labelled by Nazi officialdom as "degenerate." His love of art, however, overrides his humanity completely, leading to a climactic scene in which a group of civilian hostages are pointlessly executed as the train is abandoned.  This powerful scene questions whether great art is worth the sacrifice of even one life, and the answer the film gives is an emphatic no. And as exciting as the film has been, the ending is very downbeat and makes the film at once one of the great action films as well as a great anti-war film.

Special mention also has to go to Burt Lancaster and Paul Scofield. Lancaster was the most ebullient actor on the planet, but here he dials things way down. His Labiche is taciturn and economical in his actions. In an early scene he walks across a busy railway yard swarming with German troops and he never so much as acknowledges their existence; he simply moves through and around them as though they weren't there. It's a brilliant way of showing his disdain for them and also his subtle caution since he's on his way to a Resistance meeting. Scofield is the fire to Lancaster's ice. His towering, Shakespearean rages as his train is delayed are well worth the price of admission. It's almost as though the two actors realized they had to ramp up their performance level just to stay equal with the quality of the filmmaking.

If you watch The Train on DVD, check out Frankenheimer's director's commentary, which is an excellent blend of anecdote and discussion of filmmaking techniques.
Posted by Cary Watson at 7:18 PM