Book Review: The Pirates! In an Adventure with the Romantics (2012) by Gideon Defoe 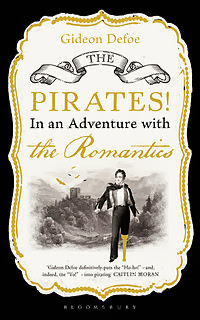 If you saw the Aardman Animantions film The Pirates! Band of Misfits (2012) you can be forgiven if you decided to give the book on which it was based (called The Pirates! In an Adventure with Scientists) a pass. You're forgiven, but you made a great mistake. The film, like any animated film, was aimed for the kids and tweens market. Bad move. The book on which it was based (and the four succeeding titles) are definitely not for kids. The filmmakers basically had to strip the book of its unique comic voice and substitute some standard kid-friendly slapstick and jokiness. That resulted in a film that fell between two stools and, not surprisingly, it stumbled at the box office. There isn't likely to be a sequel.

The Pirates! books are very silly, but it's very much a highly literate silliness that meets at the intersection of Monty Python and P.G. Wodehouse. Here's a sample from The Pirates! In an Adventure with Communists:

"You're right, of course, Captain. But I must say I have a certain yen for those big-boned, statuesque blond operatic ladies."
"Really? I'm more of a 'gazelle-like legs and delicate shoulders' kind of man. Meaning sleek like a gazelle, not with a backward-facing knee. That would be horrible."

And from the Romantics:

"Perhaps I can help?"  said the Captain, holding up his free hand. "When I wake up in the morning, I face a tricky conundrum: do I have my egg poached or boiled? You know where you are with a poached egg. It's all there in front of you, perhaps a little patronising and showy at times, but dependable. Sits nicely on the toast. It's not going to run off with a cocktail waitress, is it?"

Now I ask you, does that sound like the raw material for a kids' film? Gideon Defoe probably made enough on the deal for a down payment on a small London flat, and I say he deserves at least that because writers this funny are exceedingly rare. And it's especially difficult to find authors who can stay funny in book after book. James Hamilton-Paterson, for example, produced a comic masterpiece in 2004 with Cooking with Fernet Branca, but the sequel, Amazing Disgrace, was a disappointment. The Pirates! books score consistently high on the LOL meter.

The Romantics sees the pirates involved with Byron, Shelley and Mary Godwin (Shelley's future wife and the creator of Frankenstein). Previous books have seen the pirates crossing swords with Charles Darwin, Napoleon, Karl Marx and Friedrich Nietzsche. Describing the plot is pointless, but there are mysterious goings-on, secret passages, and a character whose hair is even more glorious than the Pirate Captain's. Mirth is guaranteed, and I can't think of a better Christmas present than all the Pirates! books for that person on your list who keeps moaning about having to reread Wodehouse because they can't find anything new that's funny.