Book Review: In the Morning I'll Be Gone (2014) by Adrian McKinty 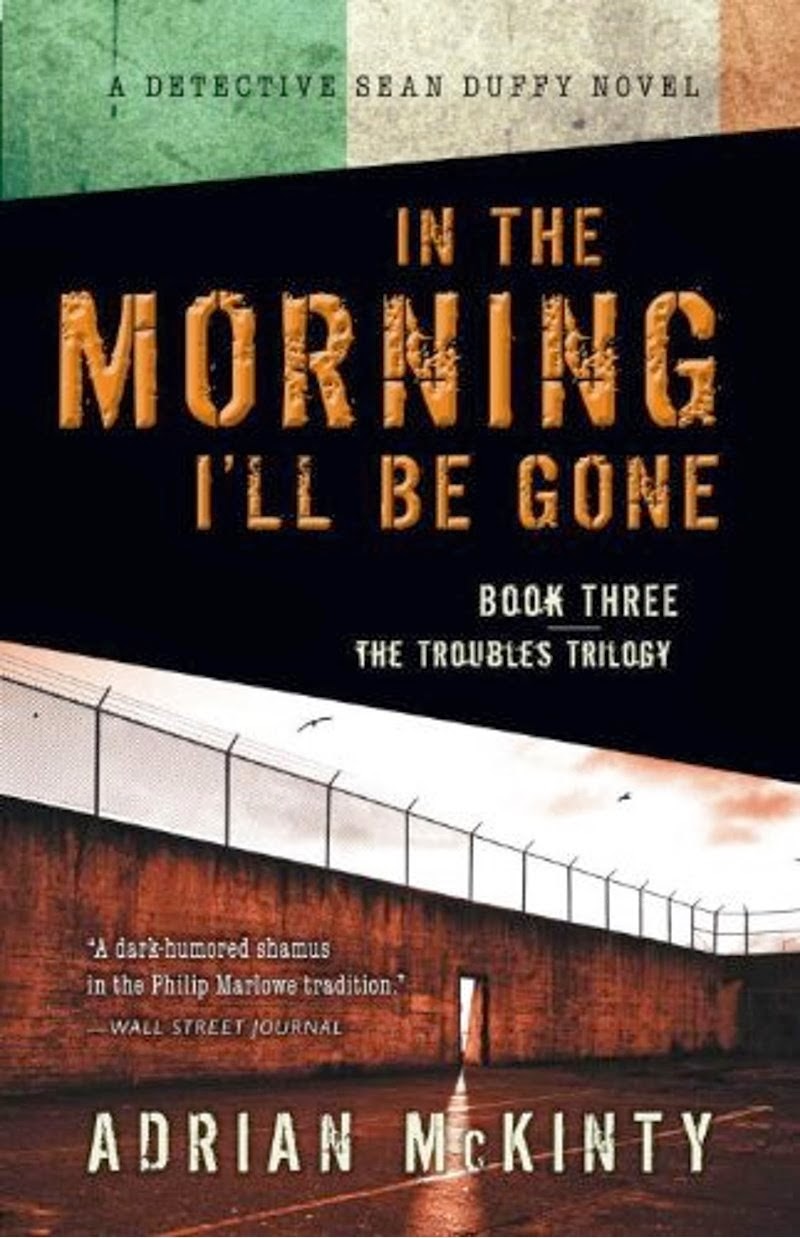 This is the final entry in Adrian McKinty's Troubles trilogy featuring Sean Duffy, a police detective working in Northern Ireland during the early 1980s. All three of the novels fall into the noir category, but this latest one has a locked room puzzle at its core that, on the surface, seems like a poor fit for noir crime fiction. Locked room puzzles were a staple during the 1920s and '30s, the so-called golden age of detective fiction, but locked room puzzles also went hand in hand with twee settings, characters with hyphenated names who drank pink gin, and detectives who were usually gifted and eccentric amateurs. Duffy is a professional copper with a taste for illegal drugs, booze, and rock 'n roll. So what on Earth is a locked room puzzle doing in a noir crime novel and with no dapper Belgian detective on hand to solve it? I'd suggest it's because McKinty is slyly suggesting that the Troubles were the locked room puzzle of post-war British politics.

The action kicks off with the famous mass escape of IRA prisoners from N.I.'s Maze prison. One of the escapees is a childhood friend of Duffy's named Dermot McCann. MI5 drafts Duffy into the hunt for McCann in the faint hope that Duffy's connections to the McCann family might produce a clue. Duffy hits a brick wall with the ultra-Republican McCann clan until he meets Dermot's ex-mother-in-law. She tells him that if he can solve the mystery surrounding the apparently accidental death of her daughter some three years previously, she might point him towards Dermot. The girl was found dead with a broken neck inside the family's pub, the doors all locked from the inside and no sign of any secret entrances. Duffy solves the puzzle and then the race is on to stop McCann before he can set off a bomb in Brighton.

This is easily the best of the Duffy books. The two previous novels, The Cold, Cold Ground and I Hear the Sirens in the Street, were full of sharp prose, black humor, and superb descriptions of the grim social and physical environment of Northern Ireland during the Troubles. This novel has all of those qualities but also a stronger, smoother plot and fewer obscure cultural references. The locked room puzzle at the heart of the story is a gem; there's no trickery to it, all the clues are out in the open, you just have to put the pieces together. The story then moves seamlessly into thriller mode and this final section is as well done as the puzzle portion of the novel.

What stands out in this series is the passion with which McKinty writes about his birthplace. He's unsparing in his depiction of the sectarian prejudices and cruelties that keep the tear gas canisters flying and the bombs bursting, but he never forgets to show that underneath all that there's a common humanity that shines out at the oddest moments; for example, when Duffy goes to question Dermot's mother her visceral loathing for him (he's a Catholic working for the largely Protestant RUC) doesn't stop her from offering him tea and sweets. And in another scene Duffy's neighbour won't let him leave for an important interview until she's personally combed his hair to her satisfaction. It would seem that the biggest locked room puzzle is trying to figure out how such murderous hatred consumed people who would otherwise be mostly concerned with fishing, pubs and who is to play Mother when the tea's ready.