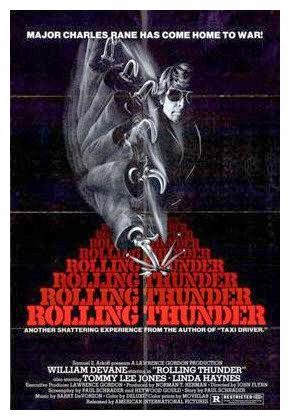 Operation Rolling Thunder was the name given to the US bombing campaign against North Vietnam and, like that military operation, this film is about American soldiers journeying into another country to commit acts of violence. Major Rane, played by William Devane, is a recently released POW who spent eight years as a captive of the North Vietnamese. He returns to San Antonio and his wife greets him with the news that she's now with another man. Rane's young son has no memory of his father. Rane takes everything in stride, never getting mad or terribly interested in what's happening around him. As Rane himself says at one point, he feels dead inside. In flashbacks we see that Rane suffered years of torture, and in the present the only thing that seems to get his juices flowing is when he feels pain or the opportunity arises to inflict pain. He gets an opportunity for both when a home invasion results in the death of his wife and son. Rane ends up with a mangled hand that's replaced with a hook, and you just know that that hook is going to be doing nasty things to even nastier people.

Rane gets out of hospital and tracks down the four American baddies who killed his family. They're living in a whorehouse just across the border in Mexico. With the help of an equally damaged vet played by Tommy Lee Jones, Rane blasts all the male occupants of the bordello. Roll credits as our wounded heroes leave the blood-spattered building.

I first saw Rolling Thunder in a grindhouse cinema in Toronto a couple of years after it first came out, and I have to say it didn't really stick in my mind. Having seen it again I can see why. Unlike most B-grade action films of that time it's a restrained, almost austere piece of filmmaking. Until the final shootout/massacre, the film is mostly a carefully observed character study of a man whose humanity has been worn away by years of prison brutality. The film is also technically better than others of its ilk, with crisp editing and nice use of locations in Texas and Mexico. What really stands out on a second viewing is the performance of Linda Haynes as Rane's sort-of girlfriend. She plays a barmaid who attaches herself to him the way (as she explains it) a groupie goes after a rock star. The role is a difficult one because her character's motivation for doing this is fairly opaque, especially given that Rane barely has a personality, so we're left wondering why she tags along with him. Despite that obstacle, Haynes manages to conjure a convincing portrait of a bored small-town woman who's been around the block too often with the wrong kind of men, and is now, in her own way, as brutalized as Rane. In truth, it's Haynes' performance that holds this film together. Without her to provide a spark of warmth and human emotion, the film would be nothing but a monotone exercise in violence. It crossed my mind at one point that The Last Picture Show would have been a lot better if Haynes had somehow been given the Cybil Shepherd role.

The finale in Mexico is interesting because it's another example of one of the oldest and most durable tropes in American filmmaking: the concept that Mexico is a place where Americans can go to raise hell without any consequences. From Vera Cruz to The Wild Bunch to From Dusk Til Dawn, Mexico has been portrayed by Hollywood as a land of brothels and gun battles in which the locals serve as cannon fodder for gringos. Any action movie that wanders south of the border almost inevitably has the anglo hero harrowing the resident bad guys, usually in mass quantities. I can't think of another cinematic equivalent unless it's the thrashing the Japanese take in Chinese kung fu films, but at least in those films the Japanese are shown to be fearsomely competent. Hollywood's Mexico is full of bumbling, machismo-addled thugs who can't shoot straight and spend a lot of time leering (the better to show off their bad teeth) and sweating profusely in skanky cantinas. It's the cinematic equivalent of hate literature, but it shows no signs of running out of steam if the trailer for the next Scwarzenegger movie is anything to go by:

"Hollywood's Mexico is full bumbling, machismo-addled thugs who can't shoot straight and spend a lot of time leering (the better to show off their bad teeth) and sweating profusely in skanky cantinas."