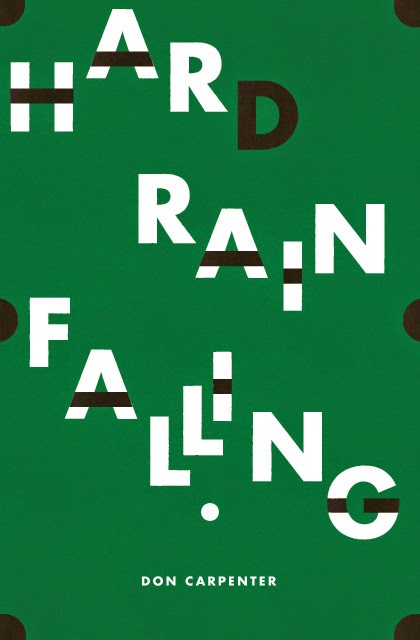 In one of my recent book reviews I ranted about writers reviewing the works of other authors. Hard Rain Falling has glowing testimonials from George Pelacanos, Anne Lamott, Richard Price and Jonathan Lethem. I guess they're the exception that proves the rule, because Carpenter's novel is a startlingly original work that, rather amazingly, was out of print for a very long time. The problem may have been that upon first publication it was advertised and reviewed as a crime novel. Jack Levitt, the novel's central character, moves in a criminal milieu most of the time but crime fiction fans would have been bitterly disappointed, not to say shocked, by Carpenter's relentless focus on Levitt's existential despair and anger. Yes, this is pure literary fiction, having more in common with novels by writers such as Sartre, Camus, and Patrick Hamilton than anything from the hard-boiled or noir schools of crime fiction.

Levitt is raised in an orphanage in rural Oregon in the late 1940s after being abandoned by his feckless parents at an early age. Jack runs away from the orphanage to Portland where he becomes a petty criminal, hanging around pool halls, scrounging a living from the occasional job or petty theft. It's there he first meets Billy Lancing, a black teenager who's also a runaway like Jack. Billy has a tremendous gift for shooting pool and makes his living hustling games. The two don't really become friends, but Jack finds something admirable or appealing in Billy's pure talent. The story hops in and out of Jack's wandering life, which is mostly spent in divey hotels and bars. He also ends up in jails and, finally, in San Quentin prison. In prison Jack is reunited with Billy, whose life has been almost as messed up as Jack's. Jack spends three years in prison with Billy as his cellmate, and they eventually become lovers. Shortly before Jack is released, Billy is murdered while trying to protect him from a prison gang. Jack finally goes straight after leaving the "Q", as it's called, and ends up married to a woman from a much higher social bracket. Complications ensue.

When we first meet Jack as a teenager he's a brutalized, empty soul, and his character arc in the novel can be loosely described as a philosophical and psychological journey to acquire some humanity. It's not an easy, pleasant or entirely successful trip. Jack sees no meaning in the world and barely any value in existence itself. Here's a taste of Jack's acid view of life:

"All right. Everything is a dream. Nothing hangs together. You move from one dream to another and there is no reason for the change. Your eyes see things and your ears hear, but nothing has any reason behind it."

Jack absolutely revels in the power of negative thinking. Almost all the novel is written in this tone, but the perfect clarity and ferocious honesty of Jack's scathing analysis of existence (as seen from his perspective) is actually exhilarating. This kind of writing can easily drift into tediousness and cheap nihilism, but with Jack we believe that his brutish, streetwise existential angst is coming from actual experience. Jack's seen the worst from people and so he's basing his worldview on bitter experience. Literature is filled with middle-class characters saying roughly the same things, but most of the time they sound like solipsistic whiners. Jack doesn't have a self-pitying bone in his body.

The most powerful part of the novel might be the relationship between Jack and Billy. The two men don't discover that they're gay while in prison, they discover that they have a desperate need for intimacy and love. The sex is secondary, and the awakening of Jack's humanity is attributable to his romantic relationship with Billy, brief though it is. The other exemplary aspect of the novel is the way in which Carpenter captures the flavour of life on the fringes of society. The atmosphere and cynical camaraderie found in pool halls, bowling alleys and cheap hotels is vividly described, and the scenes set in prison are the best of their kind I've ever read outside a memoir.

One way of looking at Hard Rain Falling is as a modern, R-rated retelling of The Adventures of Huckleberry Finn. Both novels are picaresque (more or less), and both have a surprising relationship between a black and white youth. And in turn, it's obvious that Hard Rain Falling has exerted its own influence on later writers, specifically Jonathan Lethem, whose The Fortress of Solitude (my review) is clearly based on Carpenter's template. In fact, Lethem edited Carpenter's last, and unfinished, novel Friday's at Enrico's which was released just this year. The only flaw in Hard Rain Falling is one also shared by The Fortress of Solitude: both novels sputter and fumble at the end. Jack's relationship and marriage with Sally brings the novel down to earth with a thump. The writing remains intense, but the relationship's ups and downs veer towards melodrama more often than not. The entire last quarter of the novel is poorly conceived and the finale is clumsily abrupt rather than intriguingly ambiguous, which is probably what Carpenter was aiming for. Even with this problem, Hard Rain Falling is a remarkable novel that deserves a new readership.
Posted by Cary Watson at 4:16 PM

Another terrific review... Thanks CW!
My sister just recommended David Foster Wallace - currently am reading "A Supposedly Fun Thing I'll Never Do Again" and am curious as to your take on his stuff.

Thanks! Wallace is on my TBR list, along with about three dozen other authors...working in a library can be a curse sometimes.