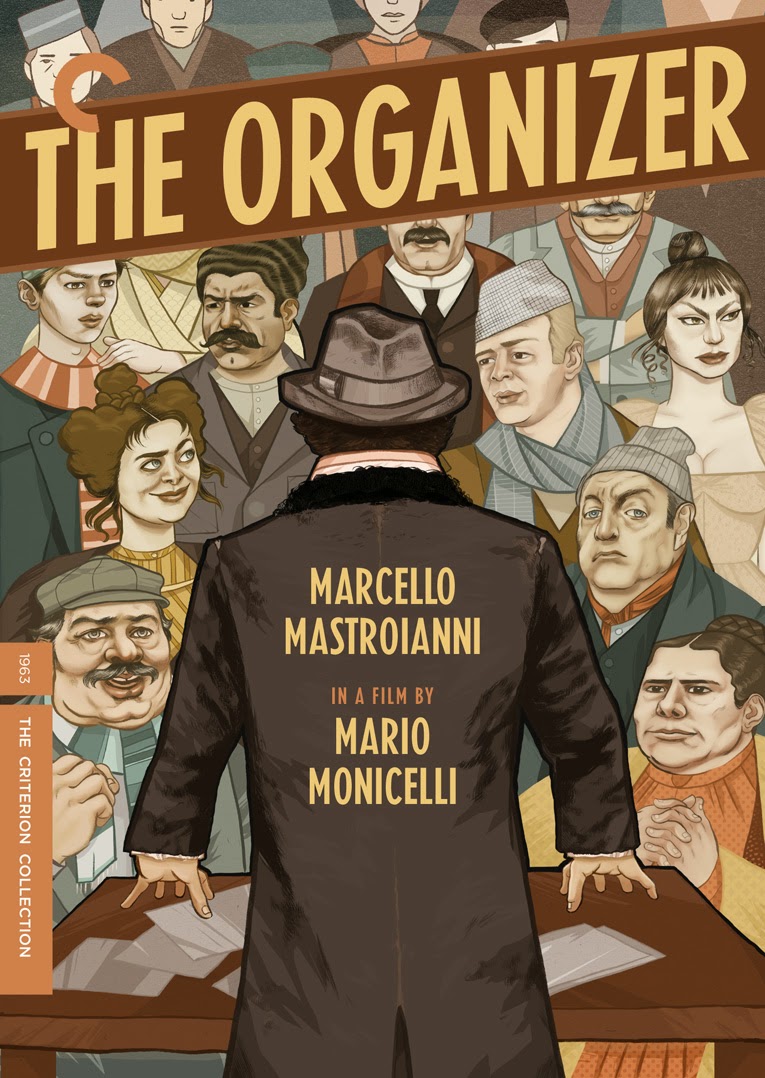 The list of films about strikes, unions, and labour disputes is a short one, and it's safe to say that almost none of them qualify as light entertainment. It's not a sub-genre known for laughs and whimsy. I'd never heard of The Organizer and I really have to wonder why, because this has to be the Lawrence of Arabia of the organized labour sub-genre of films. Yes, it's that good.

The setting is a textile factory in Turin in the late 1800s. The five hundred or so workers endure 14-hour shifts in hot, dirty and dangerous conditions, and, not surprisingly, don't get paid much. One of the workers gets his hand mangled by a machine, and that serves as the impetus for the workers to at least think about demanding changes to their working conditions. As luck or fate would have it, a teacher and socialist named Sinigaglia is passing through Turin (he's on the run for political crimes) and offers his help in organizing the workers. A strike ensues, and as it drags on for several weeks the resolve of the workers is sorely tested. The owner of the factory begins to feel the pinch and offers a meagre improvement in working conditions. The workers march on the factory to occupy it, the police fire on the crowd, a striker falls dead, and the film ends with the workers filing back to their jobs with nothing gained.

That synopsis makes it sound like The Organizer is yet another breast-beating, long-faced melodrama about the kicking the working-classes take from plutocrats. What makes this film so brilliant and surprising is how exuberantly and broadly entertaining it is. There's tragedy, yes, but there's also romance, comedy, pathos, farce, social commentary, slapstick, and action. The script and the director do a masterful job of weaving multiple characters and sub-plots into a story that resonates because it's so multi-dimensional. Most labour-oriented films are polemical, and that can distance an audience from the story. This film is so engaging, so lively, so filled with vibrant characters that the message aspect of the story works on an almost subliminal level.

I referenced Lawrence of Arabia because one of the most riveting aspects of The Organizer is the cinematography. Cinematographer Giuseppe Rotunno gives every scene an epic quality, no matter if the location is a tenement or a grimy factory. One of among many superbly filmed sequences shows people filching coal from a railway siding. The sequence's shot composition, the staging of the action, and the camera movements are those that we're used to seeing in films with more monumental subjects and budgets. The look of the film is actually used to make us feel how important this struggle is. The plight of workers in a forgotten time and place isn't an easy sell to an audience, but thanks to the film's majestic, dynamic cinematography, the story and its characters are given a gravitas that might not have existed with a more conventionally-shot film.

The film also gets bonus marks for not demonizing management in any ridiculous way. The factory's manager is simply behaving as one would expect a late 19th-century capitalist to act, and in a clever little scene we see the manager being put in his middle-class place by the factory's owner. The manager is visiting the owner at his home where a birthday party is going on. The manager is there to update the owner on the strike, and when their chat is over the owner invites him to join the party but then instantly and coldly disinvites him with the words, "But you're not dressed suitably." It's the owner's upper-class way of telling him that he's not one of them. The factory's owner scoots around in a wheelchair, and I'll hazard a guess that the crippled railroad owner in Sergio Leone's Once Upon a Time in the West is a reference to this character. Mario Monicelli, the director and scriptwriter of The Organizer, even references his own previous masterpiece, Big Deal on Madonna Street, with an almost identical closing shot that suggests work is a prison. And once again this film proves that Italian cinema of the 1960s and '70s (my review of Investigation of a Citizen Above Suspicion) was unmatched when it came to turning politics and social issues into mass entertainment.
Posted by Cary Watson at 9:53 PM

Email ThisBlogThis!Share to TwitterShare to FacebookShare to Pinterest
Labels: Giuseppe Rotunno, Lawrence of Arabia, Mario Monicelli, Once Upon a Time in the West, The Organizer