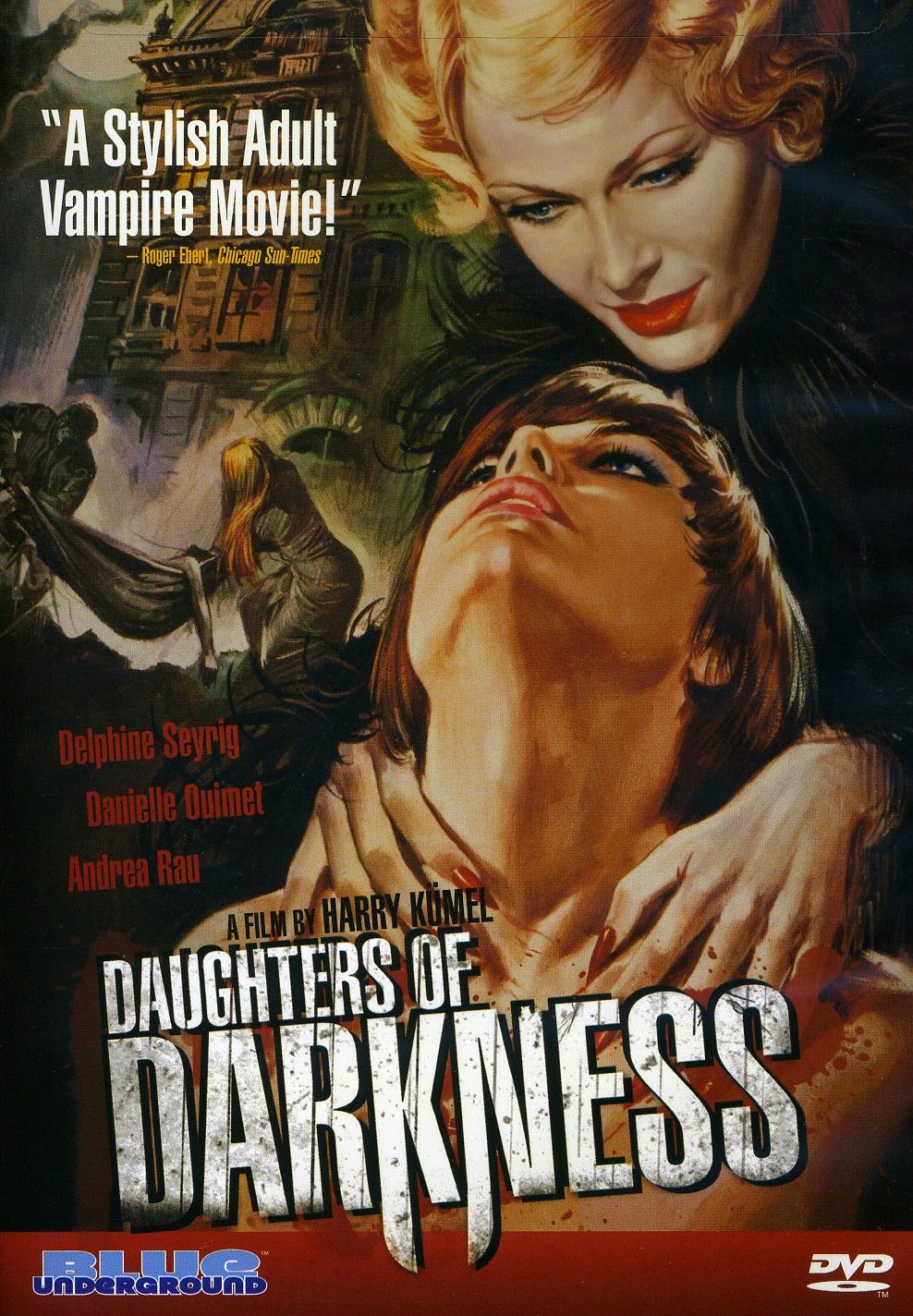 If you're a horror film aficionado, Daughters of Darkness is one of the seminal films of the 1970s. I'd always been vaguely aware of it, but never made a point of seeing until I saw it featured in a 3-part documentary series on horror films done by Mark Gatiss, the co-creator and co-writer of Sherlock.

It's a contemporary vampire film about a young, attractive couple, Stefan and Valerie, who fetch up in a grand, Victorian-era beachfront hotel in Ostend, Belgium. They seem to be the only occupants of the hotel until a Countess Bathory appears with a beautiful female companion in tow. Bathory, played with languid elegance by Delphine Seyrig, is a centuries-old vampire, albeit one who seems as interested in haute couture as much as hemoglobin. The newlywed couple are supposed to be taking a ferry to England, but Bathory and her companion, Ilona, encourage the pair to stay, and it becomes clear that the Countess has her eye on Valerie as a possible replacement for Ilona. The plot has few surprises, and things end with Bathory reborn in Valerie's body.

Viewed from 2014, Daughters earns marks for moody cinematography (particularly its use of colour), nice costumes, and its creation of a suffocating atmosphere. But in the final analysis that doesn't come close to balancing out some dreadful acting, ESL dialogue, a sluggish pace, and some jagged plot holes (wait, does Stefan have a gay lover waiting for him in England?). From a 1971 perspective this film had it all: a stylish European look, a sharp break with genre conventions, and, most importantly, lots of nudity and sex, some of it lesbian! Yes, Daughters easily fulfills its early '70s transgression quota. Like so many films from that period that are remembered fondly or have achieved posthumous, as it were, critical regard, they are, at heart, exploitation films that have a patina of art and sophistication. As someone who grew up in that era, let me tell you that the appeal of these films lay entirely with the amount of violence and sex they offered.

What's increasingly forgotten about genre filmmaking in the late '60s and early '70s is that it was all about the R-rating (X for you in the UK). Film companies, especially the B-level ones like Hammer Films or Roger Corman's American International Pictures, but also, on occasion, the Hollywood studios, could make and market films purely on the basis that they offered t & a and/or guns and mayhem, and filmmakers were happy to push the then limits of what was acceptable to show on film. So on the one hand you have a film like Streetfighter (1974) banned in some quarters because it showed Sonny Chiba ripping an enemy's throat out with his bare hand in gory, Technicolor detail, and on the other there was Big Bad Mama (1974), a Bonnie and Clyde ripoff, that's actually about showing fading '60s star Angie Dickinson in the buff.

Filmmaking in the '70s was the culmination of a trend that began about ten years before. Films of the '30s, '40s and 50s were fairly democratic in their approach to audiences. Most Hollywood films were designed to appeal to all genders and ages, and even the B-movies of the '50s would mix in some romance to appeal to women, and nothing they put on the screen was graphic enough to keep kids out of the theatres. The release of Dr. No (1962) marks the beginning of a crucial change in how films were made. Lots of films were now being made to appeal exclusively to male tastes and fantasies. This testosterone-based cinema gained traction throughout the '60s as producers took advantage of relaxed censorship rules to bring in more graphic sex and violence. It was a pleasingly simple formula for them; no matter if the script was ramshackle, the director mostly drunk, and the actors more used to modeling clothes than reading lines, as long as enough blood was splashed around and some breasts were bared, profits were guaranteed.

Testosterone cinema was often good, crazy, dirty fun, but what's often glossed over is how enthusiastically misogynist it was, and Daughters doesn't miss out on this trend. The Valerie character is brutally beaten by her husband in one scene, and that's par for the course in a lot of the films of that era. Whether it was a counter-revolutionary reaction to Women's Liberation, or simply an effort to be transgressive, films of this period were filled with violence against women, particularly scenes of rape. In fact, rape may be the defining image of these types of films; from schlockmeisters like Russ Meyer to auteurs such as Sam Peckinpah, Sergio Leone, and Stanley Kubrick, rapes and the threat of rape were a recurring theme in dozens of films. Rape was even played for laughs in films such as Butch Cassidy and the Sundance Kid and There Was a Crooked Man.

The spate of testosterone films that started in 1962 began to peter out (slowly) with the release of Star Wars and Jaws. The studios suddenly found (or realized once again) that films which appealed to the widest possible demographic produced massive profits. Films aimed at a male audience continued to be made, but their toxic levels of sexism and misogyny began to decline. The game-changing film in this regard was probably Alien, in which a beautiful woman gets to take charge, kick ass, show her smarts, and doesn't have to get naked. It's success made even B-movie producers realize that having a female character doing something, rather than just take her clothes off, made economic sense. Manly films made for manly men are still being made, but largely they've dispensed with the casual and comic brutality against women. The Expendables films, for example, are made for men, but there's nothing anti-feminist about them.

One unfortunate side effect from the testosterone era is that filmmaking and film criticism became entrenched as an all-male activity. The film industry was so relentlessly focused on satisfying male tastes and fantasies it sent a strong message to women that this art form was for men and men only. In the decades since then, women have slowly made inroads into the directing ranks, but film critics for major papers and magazines are still overwhelmingly male. This means that it's male opinions and tastes that largely define what's regarded as notable or worthy in films of the past and, to a large degree, in the here and now. And that brings us back to Mark Gatiss. Like most fanboys of '70s films (and I'm guilty of this as well), he glosses over the fact that this era, as much as it was filled with bold, innovative films, also represented the nadir of how women were depicted in films, both mainstream and otherwise. The occasional artistry of films like Daughters of Darkness shouldn't blind us to the fact that women became the collateral damage in films that were really all about pleasing male tastes.
Posted by Cary Watson at 5:18 PM