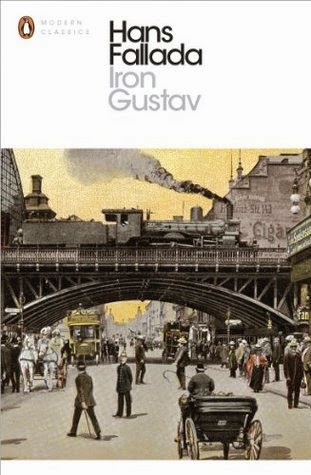 The eponymous anti-hero of this novel is Gustav Hackendahl, the owner of a large fleet of horse-drawn cabs in pre-World War One Berlin. As his nickname implies, Gustav is hard, unyielding, and largely devoid of any emotions, excepting rage when his will is thwarted. Not a person you'd pick for father of the year, and that's the tragedy at the heart of the story. Gustav has a wife and five children, and this sprawling novel charts the decline and fall of Gustav and his family (and Germany) from 1914 to the early '30s. Gustav has no love or even affection for his children. The only reason he seems to have had a family is so that he'd have people to honour and obey him.

The war begins the ruin, financial and otherwise, of the Hackendahl family. Gustav's horses are requisitioned, his eldest son joins the army, and the other children make life decisions that will take them far away from their father. One daughter, Eve, becomes a prostitute, the middle son a corrupt politician and speculator, the eldest daughter a nurse, and the youngest son drifts from school to long-term unemployment as Germany staggers through the post-war era of economic chaos and political upheaval. Sounds like fun, right? The genius of Fallada is that even though he's describing a cascading series of calamities, defeats and crises afflicting the Hackendahls and Germany, his writing never swerves into mawkishness or sentimentality. The tone throughout the novel is bitter amusement at the ways people can willfully and enthusiastically fuck up their lives and their nation. Fallada points out the political and social reasons that help push the Hackendahls over the edge, but he doesn't let the individual characters off the hook for some terrible personal choices. Fallada also allows for sheer, dumb, bad luck to enter into the story as it does in the real world.

As in his masterpiece, Alone in Berlin (my review), Fallada shows an uncanny gift for describing life on the edge. The physical and psychological pains of being unemployed and/or destitute are something he had first-hand knowledge of, and he writes about the subject with a kind of morbid joy, like someone attentively picking at a large and clingy scab. Fallada is telling the story of an entire epoch in German history and he does it through the prism of Gustav. The qualities that Gustav most prizes--stubbornness, pride, self-sacrifice, patriotism, obedience to authority--are the very ones that send his children off on orbits that mostly end in death and disaster. Gustav's prized qualities are also shared by the pre-war state, which makes his eventual decline all the more inevitable in the context of the post-war Weimar Republic.

Iron Gustav was originally conceived of as a film project, and there is a cinematic quality to certain parts of the novel that helps make it one of the most readable and, dare I say it, enjoyable tales of calamity I've ever read. It's hard to describe this novel without making it sound like a sure cure for happiness, but writing this incisive and energetic, even on a dismal subject, is always a pleasure.
Posted by Cary Watson at 6:04 PM