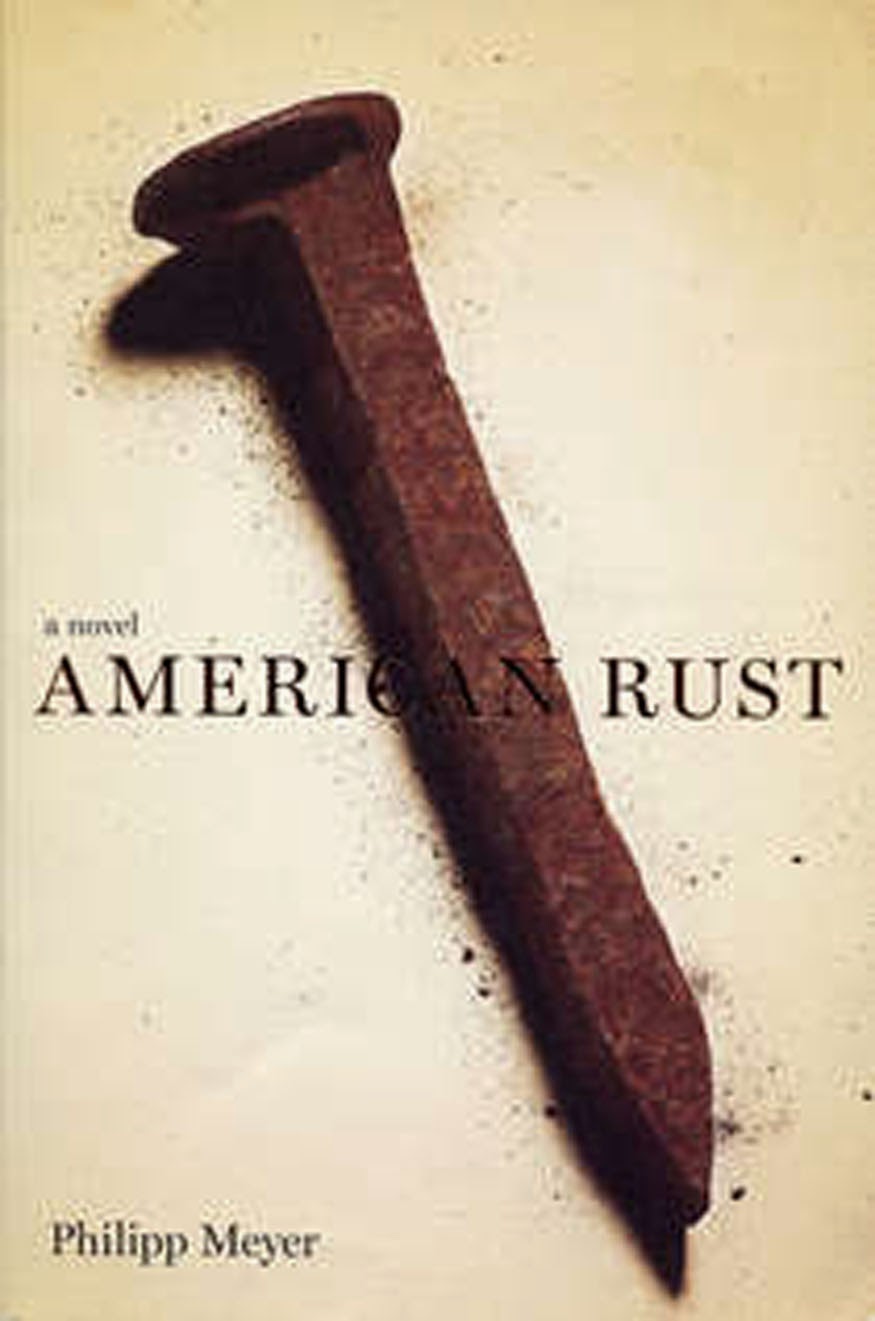 This is Meyer's debut novel, and I'm so glad I read his second, The Son (my review), before this one. The Son is big, bold, self-assured and its few flaws are the result of too much ambition. American Rust reads like a novel created by a committee tasked with putting out a literary version of a multi-part New York Times piece on life in the Rust Belt. That Meyer is a good writer isn't in doubt; he writes sharp dialogue, his characters (the male ones, anyway) are rugged, edgy and painfully real, and his descriptions of landscapes, urban and natural, are superb. The problem here is that his novel doesn't have the ambition to be more than just a literary litany of what ails Pennsylvania's coal and steel towns.

The two central characters are Isaac and Billy, best friends, both barely out of their teens, and both unsure what to do with their lives. They live in Buell, PA, and like every other town in the region it's been economically devastated by the death of the US steel industry. Those who aren't unemployed are working for minimum wage or are living a semi-criminal life. Isaac steals some money from his crippled father and decides to hit the road to California by hopping freight trains. Billy, an ex-high school football star, opts to accompany him for no better reason than it seems like a good idea at the time. They are an unlikely pair; Isaac is a weedy brainiac and Billy is a jock with a penchant for violence. They've barely started on their journey when they have an altercation with three homeless men that ends with Isaac accidentally killing one of them by way of defending Billy. A few days later Billy is arrested and charged with the murder, which he doesn't deny in an act of self-sacrifice to give some meaning to his selfish and wasted life. Isaac, meanwhile, goes on the run. Isaac's and Billy's fractured families are drawn into the story, but it's at this point that the story runs aground. The novel is told from the POV of a half dozen or so characters, but what's missing is a compelling narrative. Once Billy's arrested the story drags its feet as we hear from the different characters and their stories of despair and struggle in the heart of the Rust Belt. The only tension or narrative momentum is provided by Billy's stint in jail as he awaits trial and faces the wrath of prison gangs. The writing in this section is excellent, but it could just as well have been dropped in from a standard crime fiction novel.

American Rust is brimming with sympathy for its beaten-down characters and the region that's become an industrial dust bowl. What's missing from this story, what makes the novel so frustrating, is that Meyer shies away from bringing politics into the story. The plight of people in the Rust Belt is entirely the result of a series of ruinous political and economic decisions made by politicians and corporate executives stretching back decades. Meyer barely hints at the factors that impoverished this region. It's akin to writing a novel set in Vichy France and not mentioning the war or the Nazis. The virtually apolitical outlook of the novel isn't unusual in American literature. European writers, especially in the crime fiction field, enthusiastically bring politics and big business into their stories. American writers can't seem to get past their nation's religious belief that the individual and the individualism is everything. They don't seem happy with the idea that a character can be a hopeless victim or puppet of forces beyond his control. Or perhaps they feel that the nuts and bolts of politics and high finance don't have a place in literature. Nineteenth century writers such as Zola, Balzac, and Trollope happily took on these subjects, but the only American of that ilk that comes to mind is Gore Vidal.

Meyer's novel ticks all the boxes when it comes to mentioning issues like drug abuse, unemployment, underemployment, municipal underfunding, poor healthcare, and so on, but without giving these issues any historical or sociological context, Meyer is doing a disservice to the very people he so clearly sympathizes with. The people in the Rust Belt know they've been victimized by politicians and big business, but in American Rust this catastrophe is almost presented as a natural disaster, something that happened for no rhyme or reason.

The committee feel to the novel comes from the inclusion of far too many stock characters and tropes from modern literary fiction. There's the suicide of a mother that damages the children; the Ivy League woman who can't resist the manly charms of Billy the jock; the embittered father, broken in body and mind; and the young, tortured genius who's just too sensitive for this world. And does anyone actually ride the rails these days? Last of all, it has to be said that Meyer is poaching on literary territory created and mastered by K.C. Constantine (my piece on hiin is here), who wrote a series of crime novels set in Pennsylvania's coal and steel country. Constantine, however, was not afraid to bring politics into the mix.