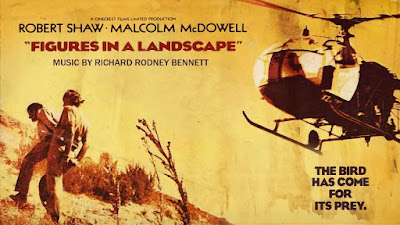 One of the great things about filmmaking in the late 1960s and early '70s is that no one knew what they were doing. The studio system in Hollywood was collapsing into bankruptcy, formerly reliable film genres such as musicals and westerns were dying on the vine, and laxer censorship meant whole new avenues of creative expression were opened up. All this meant that producers, who were as much in the dark as anyone, were willing to take a chance on projects that were non-traditional; in fact, some producers were probably hunting for oddball films to make in the hope that they'd catch the next wave that would carry them out of the film production wilderness. And that's probably how Figures in a Landscape got made.

Figures is not a good film, but it's eccentric ambitions make it very watchable. The two stars are Robert Shaw and Malcolm McDowell, the director was Joseph Losey, and Shaw also wrote the screenplay, which is based on a novel by Barry England. The minimalist story has two men, Mac and Ansell, on the run from the authorities in an unnamed country. We don't know their crime, their guilt or innocence, or the political character of the country they're in. They're pursued by an ominous black helicopter that seems able to find them at will and direct ground forces against them. The landscape of the title is arid and mountainous (it was shot in Spain), and might be a country in southern Europe or even Latin America. The men's goal is a snowy mountain range that marks the border with another country.

Harold Pinter's name isn't on the credits, but it might as well be. Shaw and Losey had both worked with Pinter on multiple occasions and his influence is very clear. This is an action film that's also a bickering, claustrophobic, absurdist drama, with the helicopter and its faceless pilot becoming a symbol of...well, whatever you want, I guess. Mac and Ansell dislike each other from the beginning and are reluctant allies. They spend most of their time quarreling or telling redundant stories about their lives back in Britain, and like many Pinter characters they attach enormous importance to the most trivial details of their lives. As a Pinter play, it's not a very good one. The dialogue isn't sharp or witty or off-kilter enough, and Mac (Shaw) gets far too much of the dialogue. Ansell (McDowell) spends most of the film looking scared and not much else.

What saves this film are its cinematic elements. The cinematography and use of locations is excellent, as is the musical score by the underrated Richard Rodney Bennett. What's most surprising about the film is its action scenes. Early in the film Mac and Ansell are buzzed by the chopper in a sequence that looks like it was very dangerous to film for both the actors and the pilot. Another sequence set in a cane field is equally dynamic, and, all in all, it's possible to enjoy this film as the most stripped-down action/escape film ever made. I have a feeling that was the intention all along; to try and do an action-adventure film without any of the traditional back story and character development that encumber most films in this genre. The attempt to add some intellectual cachet to the story through the use of stylistic references to Pinter and Samuel Beckett is wholly unsuccessful. Although the producer really missed an opportunity to call the film Running From Godot. Now that's marketing.