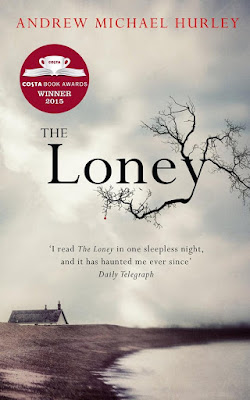 The DNA for this wonderfully atmospheric and unsettling novel of the supernatural set in the 1970s can be found in two places. The first is The Little Stranger by Sarah Waters. What Waters did in her novel was overlay a ghost story on a story that's largely about the social upheaval in post-war Britain as it moved rapidly to a social welfare state. This gave her novel a complexity and resonance that's lacking in most horror/supernatural fiction, which tend to have a relentless focus on nothing but the scares. Like Waters, Hurley has crafted a solid, complex, elegantly-written novel that includes a horror element, but it's not all about the horror. Take away the supernatural element and The Loney could still stand on its merits as a straight novel about faith, especially its blindness.

The other strand of DNA in Hurley's novel comes from Barbara Pym, a forgotten and then rediscovered novelist from the 1960s and '70s. Pym wrote gently comic novels about the English middle-classes. Her characters place great importance on social rank and the proper observance of social customs and traditions, often in the context of the Anglican church. Hurley gives us a group of people who could easily have wandered in from a Pym novel One couple even has a wonderfully fruity and Pym-like surname: Mr and Mrs Belderboss. Like Pym's characters, Hurley's are middle-class and carefully, constantly snobbish about their inferiors, especially those who don't appear to be sufficiently pious. And at times, between the chills and frights, Hurley invites us to smile, if not laugh, at their buttoned-down silliness.

And so on to the plot: the unnamed narrator is a fifteen year-old boy who is the chief carer for his brother Andrew, who is mute, probably autistic, and several years older. Their parents, the Smiths, are devout Catholics and their lives revolve around their church, which has recently changed priestly hands. Father Bernard is the new, young, Irish priest. His predecessor died "suddenly," as they say. The Smiths and Belderbosses aren't keen on this disturbance to their routine, and their first chance to put the new dog collar-wearer to the test comes on their annual Easter pilgrimage. They go to a place on the northwest coast of England called the Loney. It's a bit of untamed coastline that's infamous for is deadly tides and bogs. The house they stay in, called the Moorings, is architecturally in keeping with the gloomy, haunted surroundings. The pilgrimage is a both a retreat and a chance to visit various local shrines. The Smiths fervently believe that God will cure Andrew on one of these pilgrimages.

The Smiths and Belderbosses have happy memories of previous trips to the Moorings, but nothing goes right this time. A third couple, Miss Bunce and her fiance David, had lobbied to go to Wales instead, and Bunce is quick to voice her displeasure at the roughness of the land and the accommodations. None of them are entirely happy with Father Bernard, who seems insufficiently stern, and the weather is thoroughly crappy. And then there's those locals; they're an ominous crew with yeasty accents and a habit of making startling and unnerving appearances.

Without dropping spoilers all over the place it's tricky to describe what constitutes the horror in The Loney. Hurley achieves his goal by layering episodes and glimpses of savagery, menace, eeriness, and disquietude. What it all seems to add up to is that the Loney is a patch of England where pagan beliefs and spirits still hold sway, not to mention some nasty black magic. All this pagan horror is nicely contrasted with the religious activities of the pilgrims at the Moorings, who are equally obsessed with the magic in the form of prayers, holy talismans and Christian shrines. It's a case of two sides of the same coin, only the pagans appear to have backed the winning side.

Hurley's deftness with character-building really puts this novel on a different plane. Tonto, who we meet as an adult at the beginning and end of the novel, is shrewd, caring, perceptive and agnostic, if not atheist, at an early age. He's wise enough to see that the faith of his parents and their peers is equal parts hobby and play-acting. The adult characters, even the minor ones, are sharply drawn. The Smiths and their friends could have easily been portrayed as purely fatuous or shallow, but Hurley takes the harder route of showing people whose often foolish belief in faith arises from being wounded or frightened, or in wishing not to offend loved ones.

So this'll be my book of the year so far, and it also has to be one of the most sophisticated horror novels I've ever read. And now please hurry up with the film version, which is in the capable hands of the people who produced Ex Machina.

From the review I was able to judge about this book which seems to be really interesting. I am always interested to custom essay service read the books that are having interesting stories in them.

Its like you had an excellent grasp on the topic matter, however, you forgot to add your own readers. Maybe you ought to consider this from a lot more than 1 angle. Or perhaps you shouldnt generalise so much. Its better if you consider what others might need to say rather than simply choosing a gut response to the topic.denzel washington net worth 2013

I simply must tell you that you have written an excellent and unique article that I really enjoyed reading. I’m fascinated by how well you laid out your material and presented your views. Thank you.celebrity net worth info